In this post I want to share thinking on ways to create horizontal scrolling experiences for the web that are minimal, responsive, accessible and work across browsers and platforms (like TVs!). Try the demo.

We'll be building a horizontal scroll layout meant for hosting thumbnails of media or products. The component begins as a humble <ul> list but is transformed with CSS into a satisfying and smooth scroll experience, showcasing images and snapping them to a grid. JavaScript is added to facilitate roving-index interactions, helping keyboard users skip traversing 100+ items. Plus an experimental media query, prefers-reduced-data, is used to turn the media scroller into a lightweight title scroller experience.

A media scroller is made of just a couple of core components, a list with items. A list, in its simplest form, can travel all over the world and be clearly consumed by all. A user landing at this page can browse a list and click a link to view an item. This is our accessible base.

Make the list items interactive with an <a> element:

Use a <figure> element to semantically represent an image and its caption:

Notice the alt and loading attributes on the <img>. Alt text for a media scroller is a UX opportunity to help bring the thumbnail extra context, or as fallback text if the image didn't load, or it provides a spoken UI for users relying on assistive technology like a screen reader. Learn more with Five golden rules for compliant alt text.

The loading attribute accepts the keyword lazy as a way to signal this image source should be fetched only when the image is within the viewport. This can be really nice for large lists, as users will only download images for items they scrolled into view.

Use color-scheme as a <meta> tag to signal to the browser that your page wants both the light and dark provided user-agent styles. It's a free dark mode or light mode, depending on how you look at it:

The meta tag provides the earliest signal possible, so the browser can select a dark default canvas color if the user has a dark theme preference. This means that navigations between pages of the site won't flash a white canvas background between loads. Seamless dark theme between loads, much nicer on the eyes.

Learn much more from Thomas Steiner at https://web.dev/color-scheme/.

Given the above content structure of ul > li > a > figure > picture > img, the next task is to add images and titles to scroll through. I've packed the demo with static placeholder images and text, but feel free to power this from your favorite data source.

Now it's time for CSS to take this generic list of content and turn it into an experience. Netflix, App stores and many more sites and apps use horizontal scrolling areas to pack the viewport with categories and options.

It's important to avoid cutting off content in layouts or leaning on text truncation with ellipsis. Many television sets have media scrollers just like this one, but all too often resort to ellipsing content. This layout does not! It also lets the media content override the column size, making 1 layout flexible enough to handle many interesting combinations. 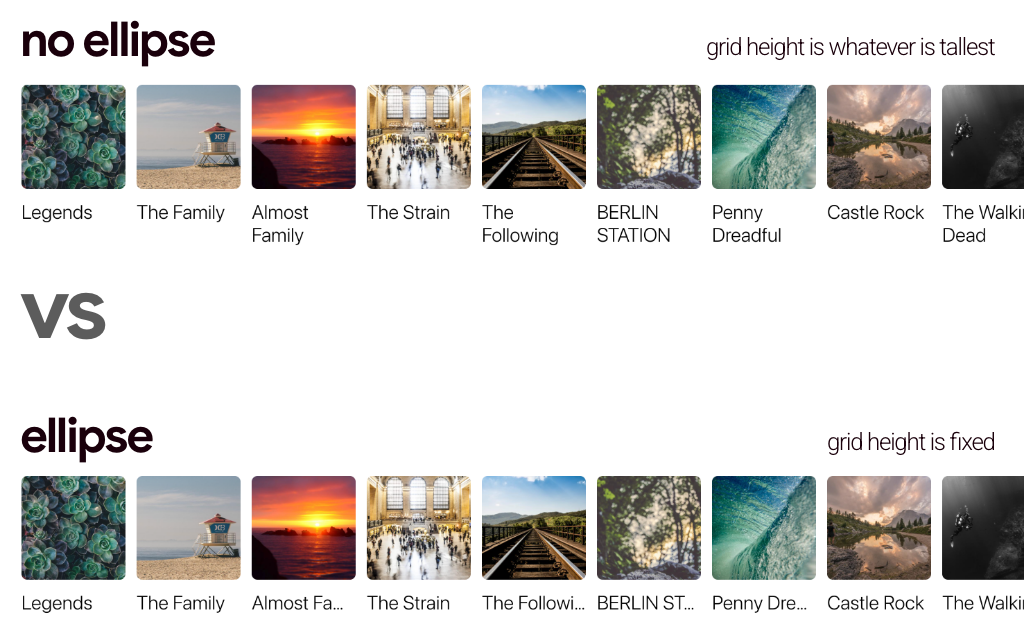 The container allows overriding the column size by providing the default size as a custom property. This grid layout is opinionated about column size, it's managing spacing and direction only:

The custom property is then used by the <picture> element to create our base aspect ratio: a box:

With only a few more minor styles, complete the barebones of the media scroller:

Setting overflow sets the <ul> up to allow scrolling and keyboard navigation through its list, then each direct child <li> element has its ::marker removed by getting a new display type of inline-block.

The images aren't responsive yet though, and burst right out of the boxes they're inside. Tame them with some sizes, fit, and border styles, and a background gradient for when they're lazy loading:

Alignment to page content, plus an edge-to-edge scrolling surface area, are critical to a harmonious and minimal component.

To accomplish the edge-to-edge scroll layout which aligns with our typography and layout lines, use padding that matches the scroll-padding:

I've simplified the example CSS here to only the logical properties. The hosted demo linked in this post has fallbacks for browsers without support for these logical shorthands.

Horizontal scroll padding bug fix The above shows how easy it should be to pad a scroll container, but there's outstanding compatibility issues with it (fixed in Chromium 91+ though!). See here for a bit of the history, but the short version is that padding wasn't always accounted for in a scroll view.

To trick browsers into putting the padding at the end of the scroller I'll target the last figure in each list and append a pseudo element that's the amount of padding desired.

Using logical properties enables the media scroller to work in any writing mode and document direction.

A scrolling container with overflow can become a snapping viewport with one line of CSS, then it's on children to specify how they'd like to align with that viewport.

The inspiration for this component comes from its massive popularity on TVs, in App Stores, and more. Many video game platforms use a media scroller very similar to this one, as their primary home screen layout. Focus is a huge UX moment here, not just a small addition. Imagine using this media scroller from your couch with a remote, give that interaction some small enhancements:

This sets the focus outline style 7px away from the box, giving it some nice space. If the user has no motion preferences around reducing motion, the offset is transitioned, giving subtle motion to the focus event.

Gamepad and keyboard users need special attention in these longs lists of scrolling content and options. The common pattern for solving this is called roving index. It's when a container of items is keyboard focused but only 1 child is allowed to hold focus at a time. This single focusable item at a time experience is designed to allow bypassing the potentially long list of items, as opposed to pressing tab 50+ times to reach the end.

There's 300 items in that first scroller of the demo. We can do better than make them traverse all of them to reach the next section.

To create this experience, JavaScript needs to observe keyboard events and focus events. I created a small open source library on npm to help make this user experience easy to achieve. Here's how to use it for the 3 scrollers:

This demo queries the document for the scrollers and for each of them calls the rovingIndex() function. Pass the rovingIndex() the element to get the roving experience, like a list container, and a target query selector, in case the focus targets aren't direct descendants.

To learn more about this effect, see the open source library roving-ux.

As of writing this post, the support for aspect-ratio is behind a flag in Firefox but available in Chromium browsers or set top boxes. Since the media scroller grid layout only specifies direction and spacing, the sizing can change inside a media query which feature checks for aspect-ratio support. Progressive enhancement into some more dynamic media scrollers.

If the browser supports aspect-ratio syntax, the media scroller pictures are upgraded to aspect-ratio sizing. Using the draft nesting syntax, each picture changes its aspect ratio depending if it's the first, second, or third rows. The nest syntax also allows setting some small viewport adjustments, right there with the other sizing logic.

With that CSS, as the feature is available in more browser engines, an easy to manage but more visually appealing layout will render.

While this next technique is only available behind a flag in Canary, I wanted to share how I could save a considerable amount of page load time and data use with a few lines of CSS. The prefers-reduced-data media query from level 5 allows asking if the device is in any reduced data states, like a data saver mode. If it is, I can modify the document, and in this case, hide the images. 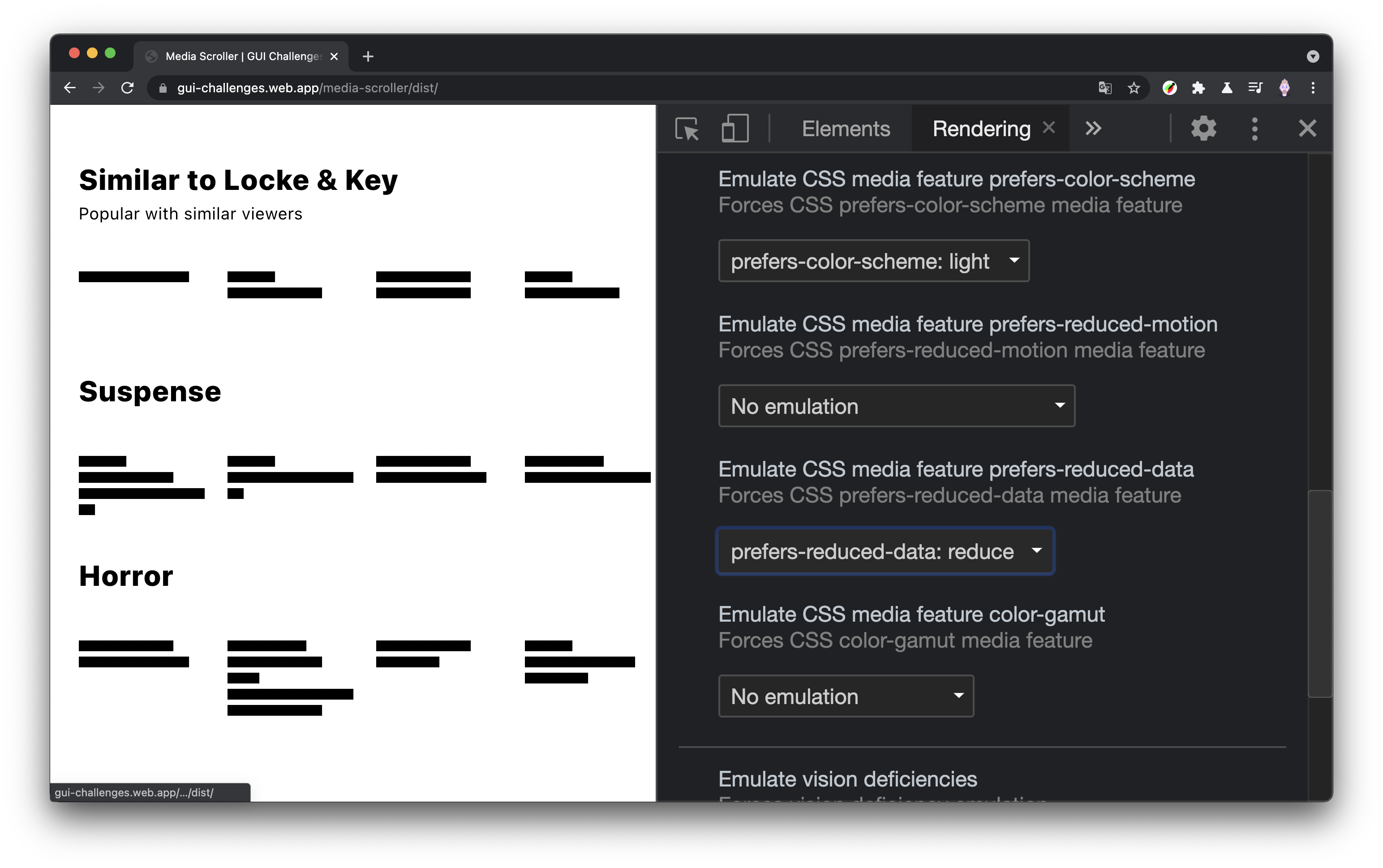 The content is still navigable but without the cost of the heavy images being downloaded. Here's the site before adding the prefers-reduced-data CSS: 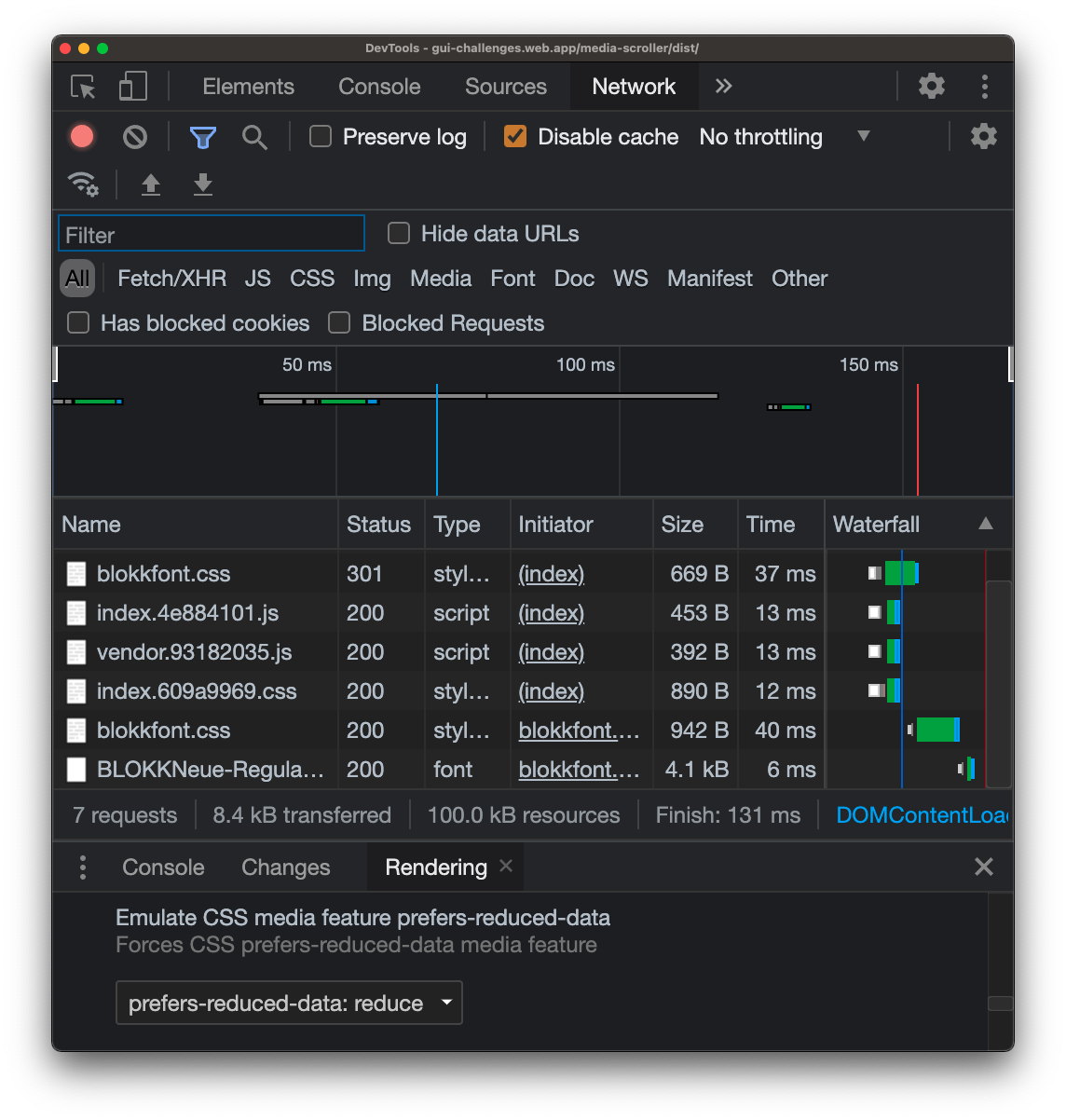 Here's the site performance after adding the prefers-reduced-data CSS: 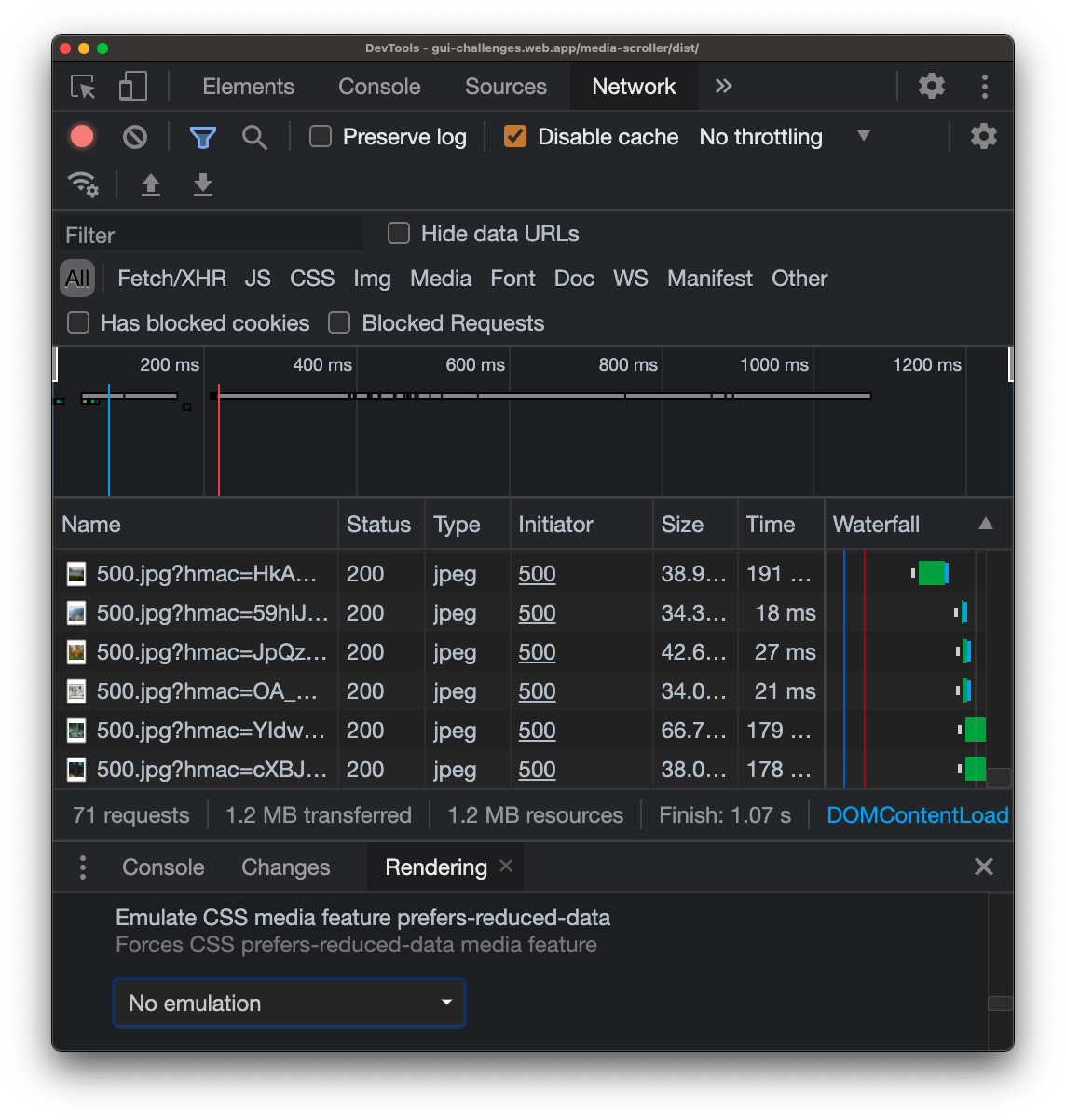 64 fewer requests, that would be the ~60 images within the viewport (tests taken on a wide screen display) of this browser tab, a page load boost of ~80%, and 10% of the data over the wire. Pretty powerful CSS.

Let's diversify our approaches and learn all the ways to build on the web. Create a Codepen or host your own demo, tweet me with it, and I'll add it to the Community remixes section below.

Nothing to see here yet!