The CSSOM and DOM trees are combined into a render tree, which is then used to compute the layout of each visible element and serves as an input to the paint process that renders the pixels to screen. Optimizing each of these steps is critical to achieving optimal rendering performance.

In the previous section on constructing the object model, we built the DOM and the CSSOM trees based on the HTML and CSS input. However, both of these are independent objects that capture different aspects of the document: one describes the content, and the other describes the style rules that need to be applied to the document. How do we merge the two and get the browser to render pixels on the screen?

First, the browser combines the DOM and CSSOM into a "render tree," which captures all the visible DOM content on the page and all the CSSOM style information for each node.

To construct the render tree, the browser roughly does the following:

The final output is a render tree that contains both the content and style information of all the visible content on the screen. With the render tree in place, we can proceed to the "layout" stage.

Up to this point we've calculated which nodes should be visible and their computed styles, but we have not calculated their exact position and size within the viewport of the device---that's the "layout" stage, also known as "reflow."

To figure out the exact size and position of each object on the page, the browser begins at the root of the render tree and traverses it. Let's consider a simple, hands-on example:

The output of the layout process is a "box model," which precisely captures the exact position and size of each element within the viewport: all of the relative measurements are converted to absolute pixels on the screen.

Finally, now that we know which nodes are visible, and their computed styles and geometry, we can pass this information to the final stage, which converts each node in the render tree to actual pixels on the screen. This step is often referred to as "painting" or "rasterizing."

This can take some time because the browser has to do quite a bit of work. However, Chrome DevTools can provide some insight into all three of the stages described above. Let's examine the layout stage for our original "hello world" example:

The time required to perform render tree construction, layout and paint varies based on the size of the document, the applied styles, and the device it is running on: the larger the document, the more work the browser has; the more complicated the styles, the more time taken for painting also (for example, a solid color is "cheap" to paint, while a drop shadow is "expensive" to compute and render).

The page is finally visible in the viewport: 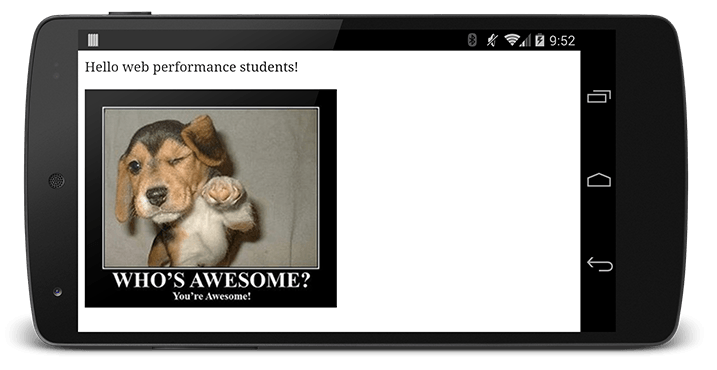 Here's a quick recap of the browser's steps:

Our demo page may look simple, but it requires quite a bit of work. If either the DOM or CSSOM were modified, you would have to repeat the process in order to figure out which pixels would need to be re-rendered on the screen.

Optimizing the critical rendering path is the process of minimizing the total amount of time spent performing steps 1 through 5 in the above sequence. Doing so renders content to the screen as quickly as possible and also reduces the amount of time between screen updates after the initial render; that is, achieve higher refresh rates for interactive content.