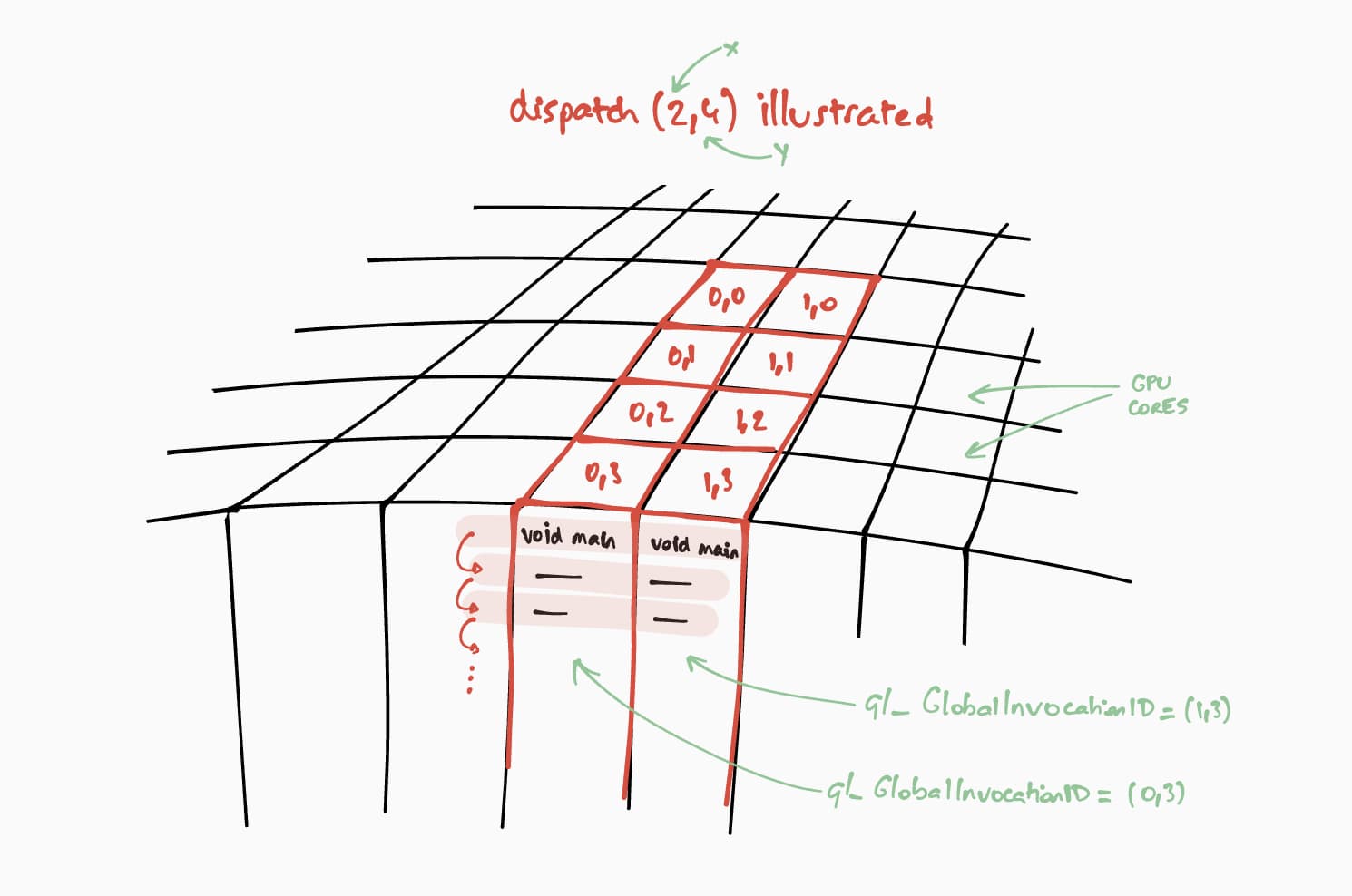 As you may already know, the Graphic Processing Unit (GPU) is an electronic subsystem within a computer that was originally specialized for processing graphics. However, in the past 10 years, it has evolved towards a more flexible architecture allowing developers to implement many types of algorithms, not just render 3D graphics, while taking advantage of the unique architecture of the GPU. These capabilities are referred to as GPU Compute, and using a GPU as a coprocessor for general-purpose scientific computing is called general-purpose GPU (GPGPU) programming.

GPU Compute has contributed significantly to the recent machine learning boom, as convolution neural networks and other models can take advantage of the architecture to run more efficiently on GPUs. With the current Web Platform lacking in GPU Compute capabilities, the W3C's "GPU for the Web" Community Group is designing an API to expose the modern GPU APIs that are available on most current devices. This API is called WebGPU.

WebGPU is a low-level API, like WebGL. It is very powerful and quite verbose, as you'll see. But that's OK. What we're looking for is performance.

In this article, I'm going to focus on the GPU Compute part of WebGPU and, to be honest, I'm just scratching the surface, so that you can start playing on your own. I will be diving deeper and covering WebGPU rendering (canvas, texture, etc.) in forthcoming articles.

WebGPU is available for now in Chrome Canary behind an experimental flag. You can enable it at chrome://flags/#enable-unsafe-webgpu. The API is constantly changing and currently unsafe. As GPU sandboxing isn't implemented yet for the WebGPU API, it is possible to read GPU data for other processes! Don't browse the web with it enabled.

Accessing the GPU is easy in WebGPU. Calling navigator.gpu.requestAdapter() returns a JavaScript promise that will asynchronously resolve with a GPU adapter. Think of this adapter as the graphics card. It can either be integrated (on the same chip as the CPU) or discrete (usually a PCIe card that is more performant but uses more power).

Once you have the GPU adapter, call adapter.requestDevice() to get a promise that will resolve with a GPU device you'll use to do some GPU computation.

Both functions take options that allow you to be specific about the kind of adapter (power preference) and device (extensions, limits) you want. For the sake of simplicity, we'll use the default options in this article.

Let's see how to use JavaScript to write data to memory for the GPU. This process isn't straightforward because of the sandboxing model used in modern web browsers.

The example below shows you how to write four bytes to buffer memory accessible from the GPU. It calls device.createBuffer() which takes the size of the buffer and its usage. Even though the usage flag GPUBufferUsage.MAP_WRITE is not required for this specific call, let's be explicit that we want to write to this buffer. It results in a GPU buffer object mapped at creation thanks to mappedAtCreation set to true. Then the associated raw binary data buffer can be retrieved by calling the GPU buffer method getMappedRange().

Writing bytes is familiar if you've already played with ArrayBuffer; use a TypedArray and copy the values into it.

At this point, the GPU buffer is mapped, meaning it is owned by the CPU, and it's accessible in read/write from JavaScript. So that the GPU can access it, it has to be unmapped which is as simple as calling gpuBuffer.unmap().

The concept of mapped/unmapped is needed to prevent race conditions where GPU and CPU access memory at the same time.

Now let's see how to copy a GPU buffer to another GPU buffer and read it back.

Because the GPU is an independent coprocessor, all GPU commands are executed asynchronously. This is why there is a list of GPU commands built up and sent in batches when needed. In WebGPU, the GPU command encoder returned by device.createCommandEncoder()is the JavaScript object that builds a batch of "buffered" commands that will be sent to the GPU at some point. The methods on GPUBuffer, on the other hand, are "unbuffered", meaning they execute atomically at the time they are called.

Once you have the GPU command encoder, call copyEncoder.copyBufferToBuffer() as shown below to add this command to the command queue for later execution. Finally, finish encoding commands by calling copyEncoder.finish() and submit those to the GPU device command queue. The queue is responsible for handling submissions done via device.queue.submit() with the GPU commands as arguments. This will atomically execute all the commands stored in the array in order.

You can try out this sample.

In short, here's what you need to remember regarding buffer memory operations:

Programs running on the GPU that only perform computations (and don't draw triangles) are called compute shaders. They are executed in parallel by hundreds of GPU cores (which are smaller than CPU cores) that operate together to crunch data. Their input and output are buffers in WebGPU.

To illustrate the use of compute shaders in WebGPU, we'll play with matrix multiplication, a common algorithm in machine learning illustrated below.

In short, here's what we're going to do:

For the sake of simplicity, matrices will be represented as a list of floating point numbers. The first element is the number of rows, the second element the number of columns, and the rest is the actual numbers of the matrix.

The three GPU buffers are storage buffers as we need to store and retrieve data in the compute shader. This explains why the GPU buffer usage flags include GPUBufferUsage.STORAGE for all of them. The result matrix usage flag also has GPUBufferUsage.COPY_SRC because it will be copied to another buffer for reading once all GPU queue commands have all been executed.

The compute shader code for multiplying matrices is written in WGSL, the WebGPU Shader Language, that is trivially translatable to SPIR-V. Without going into detail, you should find below the three storage buffers identified with var&LTstorage>. The program will use firstMatrix and secondMatrix as inputs and resultMatrix as its output.

Note that each storage buffer has a binding decoration used that corresponds to the same index defined in bind group layouts and bind groups declared above.

The compute pipeline is the object that actually describes the compute operation we're going to perform. Create it by calling device.createComputePipeline(). It takes two arguments: the bind group layout we created earlier, and a compute stage defining the entry point of our compute shader (the main WGSL function) and the actual compute shader module created with device.createShaderModule().

After instantiating a bind group with our three GPU buffers and a compute pipeline with a bind group layout, it is time to use them.

Let's start a programmable compute pass encoder with commandEncoder.beginComputePass(). We'll use this to encode GPU commands that will perform the matrix multiplication. Set its pipeline with passEncoder.setPipeline(computePipeline) and its bind group at index 0 with passEncoder.setBindGroup(0, bindGroup). The index 0 corresponds to the group(0) decoration in the WGSL code.

Now, let's talk about how this compute shader is going to run on the GPU. Our goal is to execute this program in parallel for each cell of the result matrix, step by step. For a result matrix of size 16 by 32 for instance, to encode the command of execution, on a @workgroup_size(8, 8), we'd call passEncoder.dispatchWorkgroups(2, 4) or passEncoder.dispatchWorkgroups(16 / 8, 32 / 8). The first argument "x" is the first dimension, the second one "y" is the second dimension, and the latest one "z" is the third dimension that defaults to 1 as we don't need it here. In the GPU compute world, encoding a command to execute a kernel function on a set of data is called dispatching.

As seen in the drawing above, each shader will have access to a unique builtin(global_invocation_id) object that will be used to know which result matrix cell to compute.

To end the compute pass encoder, call passEncoder.end(). Then, create a GPU buffer to use as a destination to copy the result matrix buffer with copyBufferToBuffer. Finally, finish encoding commands with copyEncoder.finish() and submit those to the GPU device queue by calling device.queue.submit() with the GPU commands.

Reading the result matrix is as easy as calling gpuReadBuffer.mapAsync() with GPUMapMode.READ and waiting for the returning promise to resolve which indicates the GPU buffer is now mapped. At this point, it is possible to get the mapped range with gpuReadBuffer.getMappedRange().

Congratulations! You made it. You can play with the sample.

An illustration of getBindGroupLayout for the previous sample is available.

So how does running matrix multiplication on a GPU compare to running it on a CPU? To find out, I wrote the program just described for a CPU. And as you can see in the graph below, using the full power of GPU seems like an obvious choice when the size of the matrices is greater than 256 by 256.

This article was just the beginning of my journey exploring WebGPU. Expect more articles soon featuring more deep dives in GPU Compute and on how rendering (canvas, texture, sampler) works in WebGPU.

Have a question about using this feature? You can get help by asking a question on Stack Overflow, or browsing a list of questions asked by other developers.
Last updated: Jan 27, 2023 — Improve article
Return to all articles
subscribe