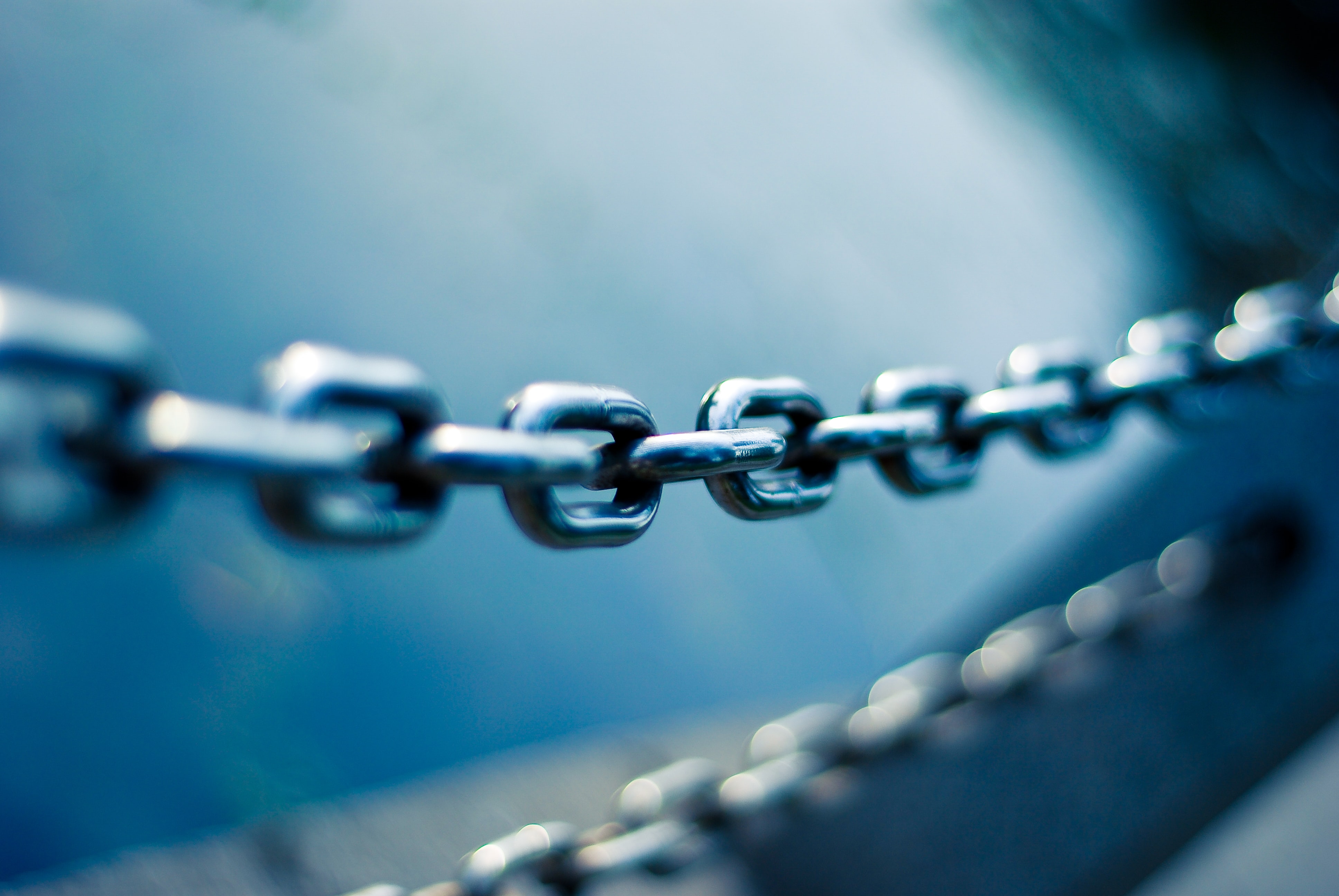 URL protocol handler registration for PWAs is part of the capabilities project and is currently in development. This post will be updated as the implementation progresses.

Background on schemes (aka. protocols) #

A Uniform Resource Identifier (URI) is a compact sequence of characters that identifies an abstract or physical resource. Each URI begins with a scheme name that refers to a specification for assigning identifiers within that scheme. As such, the URI syntax is a federated and extensible naming system wherein each scheme's specification may further restrict the syntax and semantics of identifiers using that scheme. Schemes are also known as protocols. You can see some examples of schemes below.

The term Uniform Resource Locator (URL) refers to the subset of URIs that, in addition to identifying a resource, provide a means of locating the resource by describing its primary access mechanism (e.g., its network location).

Background on the registerProtocolHandler() method #

The scheme must either be one of the safelisted schemes (for example, mailto, bitcoin, or magnet) or begin with web+, followed by at least one or more lowercase ASCII letters after the web+ prefix, for instance, web+coffee.

To make this clearer, here is a concrete example of the flow:

What this proposal is about #

The present URL protocol handler registration for PWAs proposal is about offering protocol handler registration as part of a PWA installation through its manifest. After registering a PWA as a protocol handler, when a user clicks on a hyperlink with a specific scheme such as mailto , bitcoin, or web+music from a browser or a platform-specific app, the registered PWA will open and receive the URL. It is important to note that both the proposed manifest-based registration and the traditional registerProtocolHandler() play very similar roles in practice, while still allowing the possibility for complementary user-experiences:

To experiment with URL protocol handler registration for PWAs locally, without an origin trial token, enable the #enable-desktop-pwas-protocol-handling flag in about://flags or edge://flags.

How to use URL protocol handler registration for PWAs #

The API for URL protocol handler registration is modeled closely on navigator.registerProtocolHandler(). Just this time the information is passed declaratively via the web app manifest in a new property called "protocol_handlers" that takes an array of objects with the two required keys "protocol" and "url". The code snippet below shows how to register web+tea and web+coffee. The values are strings containing the URL of the handler with the required %s placeholder for the escaped URL.

If multiple applications register themselves as handlers for the same scheme, for example, the mailto protocol, the operating system will show the user a picker and let them decide which of the registered handlers to use.

The same app can register itself for multiple protocols, as you can see in the code sample above.

Handler registrations are synchronized with the latest manifest version provided by the app. There are two cases:

You can see a demo of URL protocol handler registration for PWAs on Glitch. 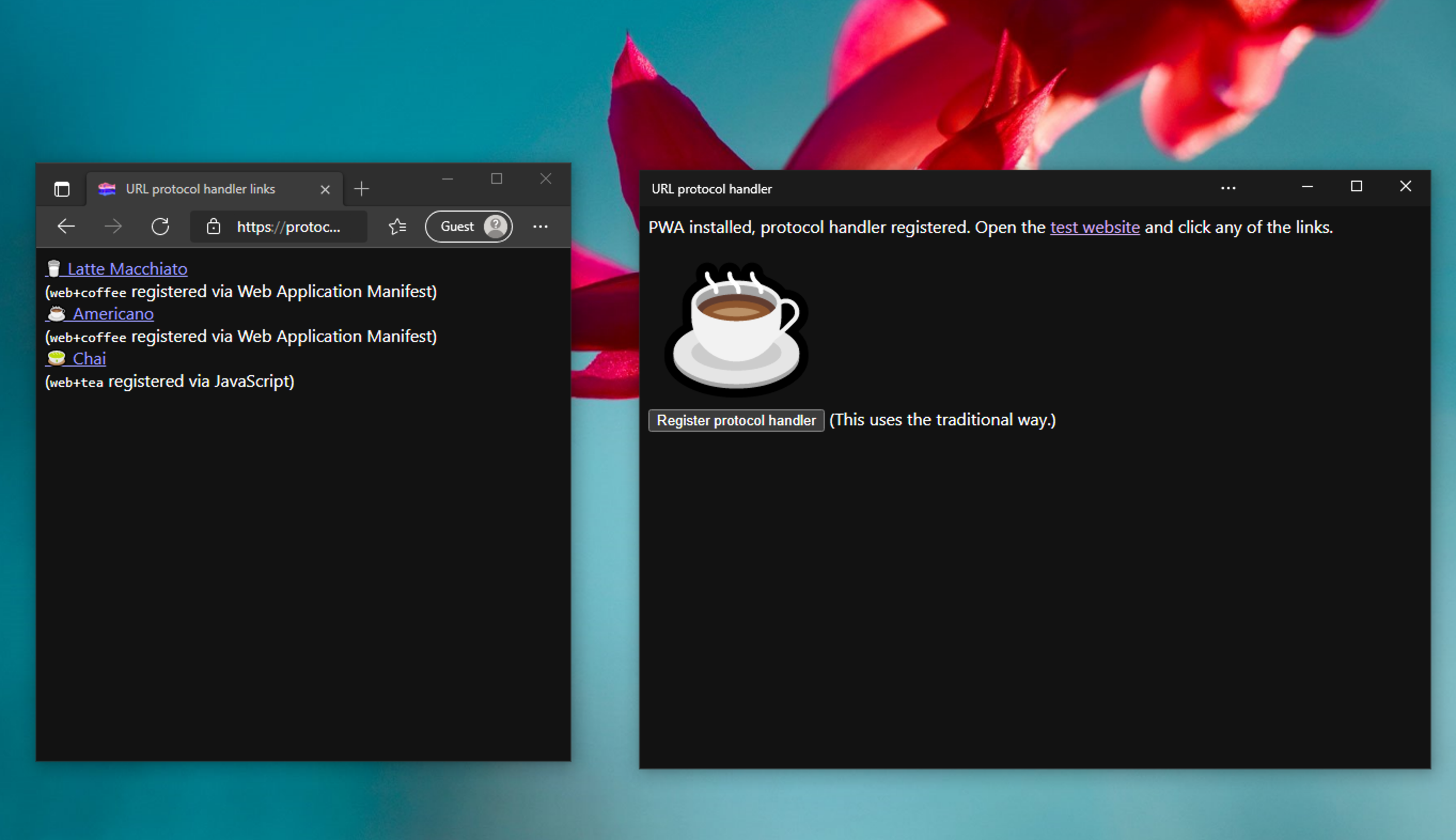 Since PWA installation requires the context to be secure, protocol handling inherits this constraint. The list of registered protocol handlers is not exposed to the web in any way so it cannot be used as a fingerprinting vector.

Navigation attempts that are not initiated by the user, but that are programmatic, may not open apps. The custom protocol URL may only be used in top-level browsing contexts, but not, for example, as the URL of an iframe.

Just like with registerProtocolHandler() there is an allowlist of protocols that apps can register to handle.

Registration of PWA protocol handlers will not take over the default handler for a protocol. Instead, the next time the protocol is invoked, an operating system disambiguation dialog will prompt the user to either keep using the default handler or select the newly registered handler.

On the first launch of the PWA due to an invoked protocol, the user will be presented with a permission dialog. This dialog will display the app name and origin of the app, and ask the user if the app is allowed to handle links from the protocol. If a user rejects the permission dialog, the registered protocol handler will be ignored by the operating system. To unregister the protocol handler, the user needs to uninstall the PWA that registered it.

The Chromium team wants to hear about your experiences with URL protocol handler registration for PWAs.

Is there something about the API that does not work like you expected? Or are there missing methods or properties that you need to implement your idea? Have a question or comment on the security model? File a spec issue on the corresponding GitHub repo, or add your thoughts to an existing issue.

Did you find a bug with Chromium's implementation? Or is the implementation different from the spec? File a bug at new.crbug.com. Be sure to include as much detail as you can, simple instructions for reproducing, and enter UI>Browser>WebAppInstalls in the Components box. Glitch works great for sharing quick and easy repros.

Are you planning to use URL protocol handler registration for PWAs? Your public support helps the Chromium team prioritize features and shows other browser vendors how critical it is to support them.

Share how you plan to use it on the WICG Discourse thread. Send a Tweet to @ChromiumDev using the hashtag #ProtocolHandler and let us know where and how you're using it.

URL protocol handler registration for PWAs was implemented and specified by Fabio Rocha, Diego González, Connor Moody, and Samuel Tang from the Microsoft Edge team. This article was reviewed by Joe Medley and Fabio Rocha. Hero image by JJ Ying on Unsplash.