We (the Chrome Speed Metrics Team) recently outlined our initial research into options for making the CLS metric more fair to pages that are open for a long time. We've received a lot of very helpful feedback and after completing the large-scale analysis, we've finalized the change we plan to make to the metric: maximum session window with 1 second gap, capped at 5 seconds.

Read on for the details!

How did we evaluate the options? #

We reviewed all the feedback received from the developer community and took it into account.

We also implemented the top options in Chrome and did a large-scale analysis of the metrics over millions of web pages. We checked what types of sites each option improved, and how the options compared, especially looking into the sites which were scored differently by different options. Overall, we found that:

Why a session window? #

In our earlier post, we covered a few different windowing strategies for grouping together layout shifts while ensuring the score doesn't grow unbounded. The feedback we received from developers overwhelmingly favored the session window strategy because it groups the layout shifts together most intuitively.

Based on the initial research, we chose a 1 second gap between session windows, and that gap worked well in our large-scale analysis. So the "Session Gap" shown in the example above is 1 second.

Why the maximum session window? #

We narrowed the summarization strategies down to two options in our initial research: 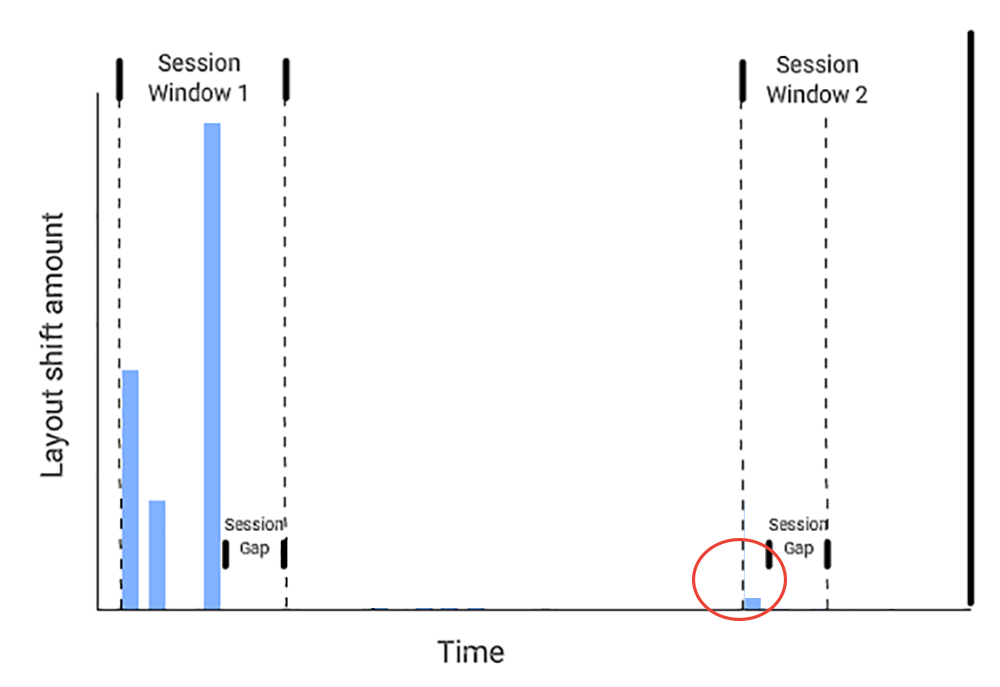 On the bottom right, you can see there is only a single, tiny layout shift in Session Window 2, giving it a very low score. That means that the average score is pretty low. But what if the developer fixes that tiny layout shift? Then the score is calculated just on Session Window 1, which means that the page's score nearly doubles. It would be really confusing and discouraging to developers to improve their layout shifts only to find that the score got worse. And removing this small layout shift is obviously slightly better for the user experience, so it shouldn't worsen the score.

Because of this problem with averages, we decided to move forward with the smaller, capped, maximum windows. So in the example above, Session Window 2 would be ignored and only the sum of the layout shifts in Session Window 1 would be reported.

With these two things in mind, comparing a variety of window sizes on many real-world web pages, we concluded that 5 seconds would be a good limit to the window size.

How will this affect my page's CLS score? #

Since this update caps the CLS of a page, no page will have a worse score as a result of this change.

And based on our analysis, 55% of origins will not see a change in CLS at all at the 75th percentile. This is because their pages either do not currently have any layout shifts or the shifts they do have are already confined to a single session window.

The rest of the origins will see improved scores at the 75th percentile with this change. Most will only see a slight improvement, but about 3% will see their scores improve from having a "needs improvement" or "poor" rating to having a "good" rating. These pages tend to use infinite scrollers or have many slow UI updates, as described in our earlier post.

We'll be updating our tools to use the new metric definition soon! Until then, you can try out the updated version of CLS on any site using the example JavaScript implementations or the fork of the Web Vitals extension.

Thanks to everyone who took the time to read the previous post and give their feedback!