Vodafone is a leading telecommunications company in Europe and Africa operating fixed and mobile networks in 21 countries and partnering with mobile networks in 48 more. By running an A/B test on a landing page (where version A was optimized for Web Vitals and had a 31% better LCP score in the field than version B), Vodafone determined that optimizing for Web Vitals generated 8% more sales.

Uplift in the lead to visit rate

Uplift in the cart to visit rate

Vodafone knew that faster websites generally correlate to improved business metrics and were interested in optimizing their Web Vitals scores as a potential strategy for increasing sales, but they needed to determine exactly what kind of ROI they would get.

The approach they used #

The traffic for the A/B test came from different paid media channels, including display, iOS/Android, search, and social. 50% of the traffic was sent to the optimized landing page (version A), and 50% was sent to the baseline page (version B). Version A and version B both got around 100K clicks and 34K visits per day. As mentioned before, the only difference between version A and version B was that version A was optimized for Web Vitals. There were no functional or visual differences between the two versions other than that. Vodafone used the PerformanceObserver API to measure LCP on real user sessions and sent the field data to their analytics provider.

Vodafone made the following changes on the optimized page (version A):

After optimizing version A for Web Vitals and comparing it to the unoptimized version B, Vodafone found that version A led to:

The following table shows the values for DOMContentLoaded ("DCL") and LCP that Vodafone observed on version A ("Optimized Page") and version B ("Default Page"). Note that DCL actually increased 15%. The absolute values related to business metrics have been redacted. 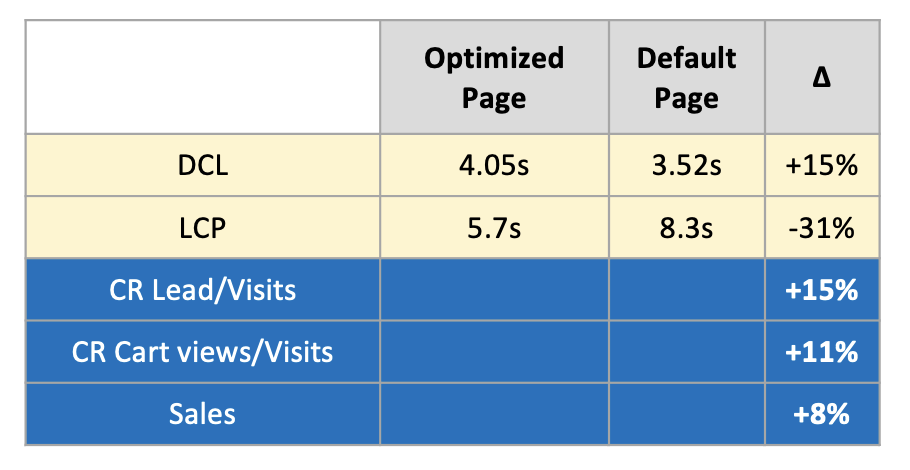 At Vodafone, we test new solutions, measure results, keep what worked and question what didn't, learning from mistakes. We call it "Experiment, Learn Fast". Thanks to the collaboration with Google and the introduction of LCP as the main KPI for page performance, it was possible to significantly improve the customer experience of our e-commerce.

Check out the Scale on web case studies page for more success stories.