Chrome is collaborating with tooling and frameworks in the JavaScript open-source ecosystem. A number of newer optimizations were recently added to improve the loading performance of Next.js and Gatsby. This article covers an improved granular chunking strategy that is now shipped by default in both frameworks.

Like many web frameworks, Next.js and Gatsby use webpack as their core bundler. webpack v3 introduced CommonsChunkPlugin to make it possible to output modules shared between different entry points in a single (or few) "commons" chunk (or chunks). Shared code can be downloaded separately and stored in the browser cache early on which can result in a better loading performance.

This pattern became popular with many single-page application frameworks adopting an entrypoint and bundle configuration that looked like this: 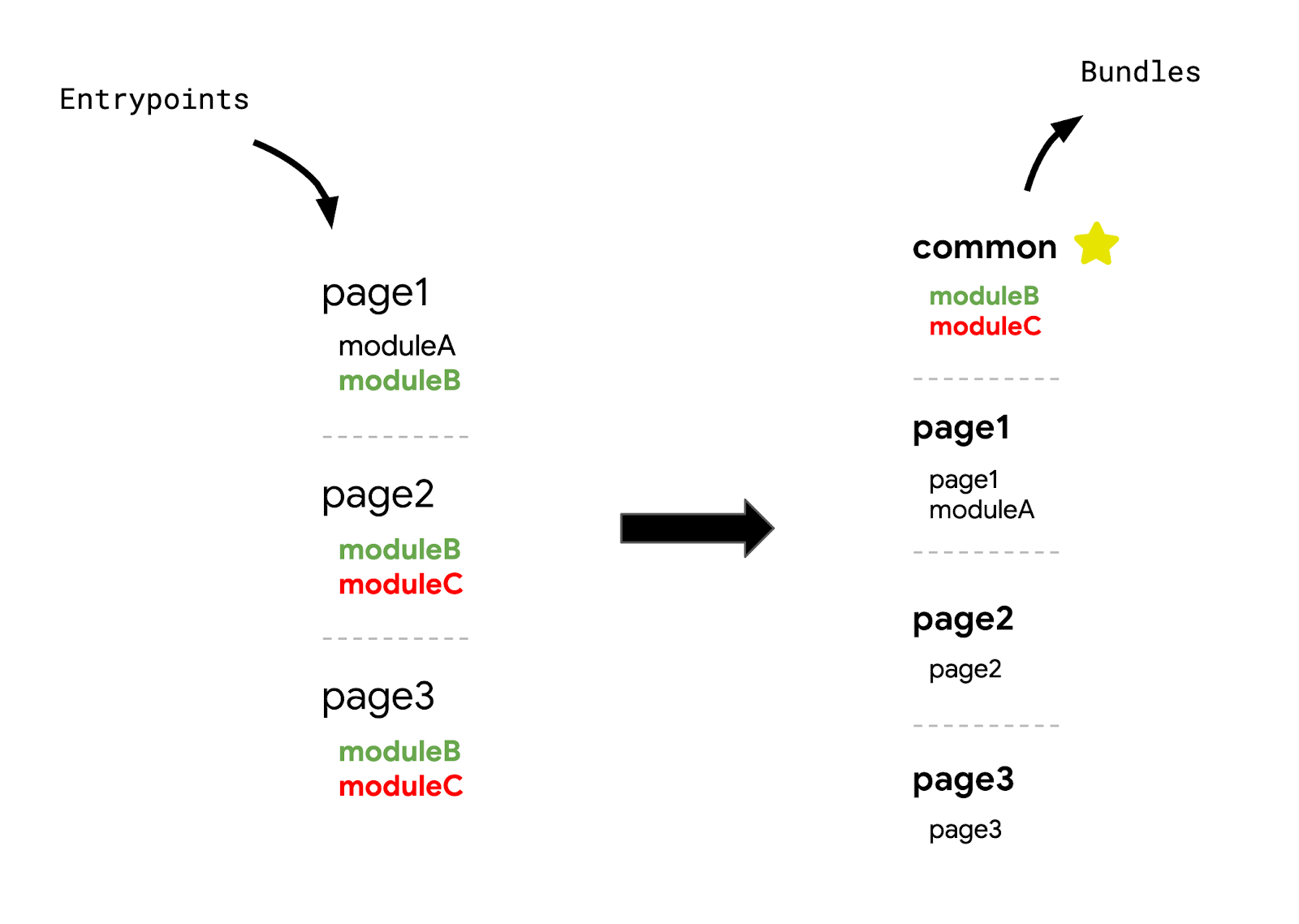 Although practical, the concept of bundling all shared module code into a single chunk has its limitations. Modules not shared in every entry point can be downloaded for routes that do not use it resulting in more code being downloaded than necessary. For example, when page1 loads the common chunk, it loads the code for moduleC even though page1 doesn't use moduleC. For this reason, along with a few others, webpack v4 removed the plugin in favor of a new one: SplitChunksPlugin.

The default settings for SplitChunksPlugin works well for most users. Multiple split chunks are created depending on a number of conditions to prevent fetching duplicated code across multiple routes.

However, many web frameworks that use this plugin still follow a "single-commons" approach to chunk splitting. Next.js, for example, would generate a commons bundle that contained any module that is used in more than 50% of pages and all framework dependencies (react, react-dom, and so on).

Although including framework-dependent code into a shared chunk means that it can be downloaded and cached for any entrypoint, the usage-based heuristic of including common modules used in more than half of pages isn't very effective. Modifying this ratio would only result in one of two outcomes:

To solve this problem, Next.js adopted a different configuration forSplitChunksPlugin that reduces unnecessary code for any route.

You can see the entire configuration that Next.js adopted in webpack-config.ts.

SplitChunksPlugin defined the basis for granular chunking, and applying this approach to a framework like Next.js was not an entirely new concept. Many frameworks, however, still continued to use a single heuristic and "commons" bundle strategy for a few reasons. This includes the concern that many more HTTP requests can negatively affect site performance.

Browsers can only open a limited number of TCP connections to a single origin (6 for Chrome), so minimizing the number of chunks outputted by a bundler can ensure that the total number of requests stays under this threshold. However, this only holds true for HTTP/1.1. Multiplexing in HTTP/2 allows for multiple requests to be streamed in parallel using a single connection over a single origin. In other words, we generally do not need to worry about limiting the number of chunks emitted by our bundler.

It is important to note that different browsers take different approaches to prioritize specific resources when many are requested over the same TCP connection. Some servers and CDNs also handle prioritization differently (see "Tracking HTTP/2 Prioritization Issues").

All major browsers support HTTP/2. The Chrome and Next.js teams wanted to see if increasing the number of requests by splitting Next.js's single "commons" bundle into multiple shared chunks would affect loading performance in any way. They began by measuring the performance of a single site while modifying the maximum number of parallel requests using the maxInitialRequests property. 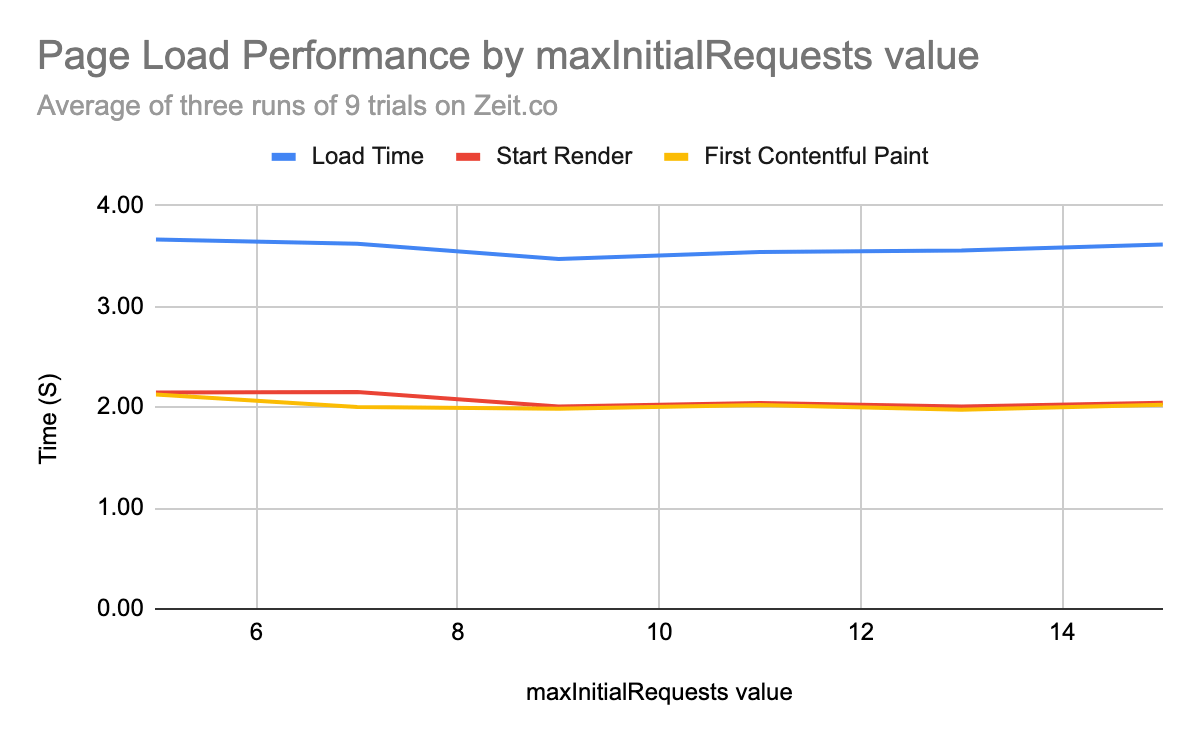 In an average of three runs of multiple trials on a single web page, the load, start-render and First Contentful Paint times all remained about the same when varying the max initial request count (from 5 to 15). Interestingly enough, we noticed a slight performance overhead only after splitting aggressively to hundreds of requests. 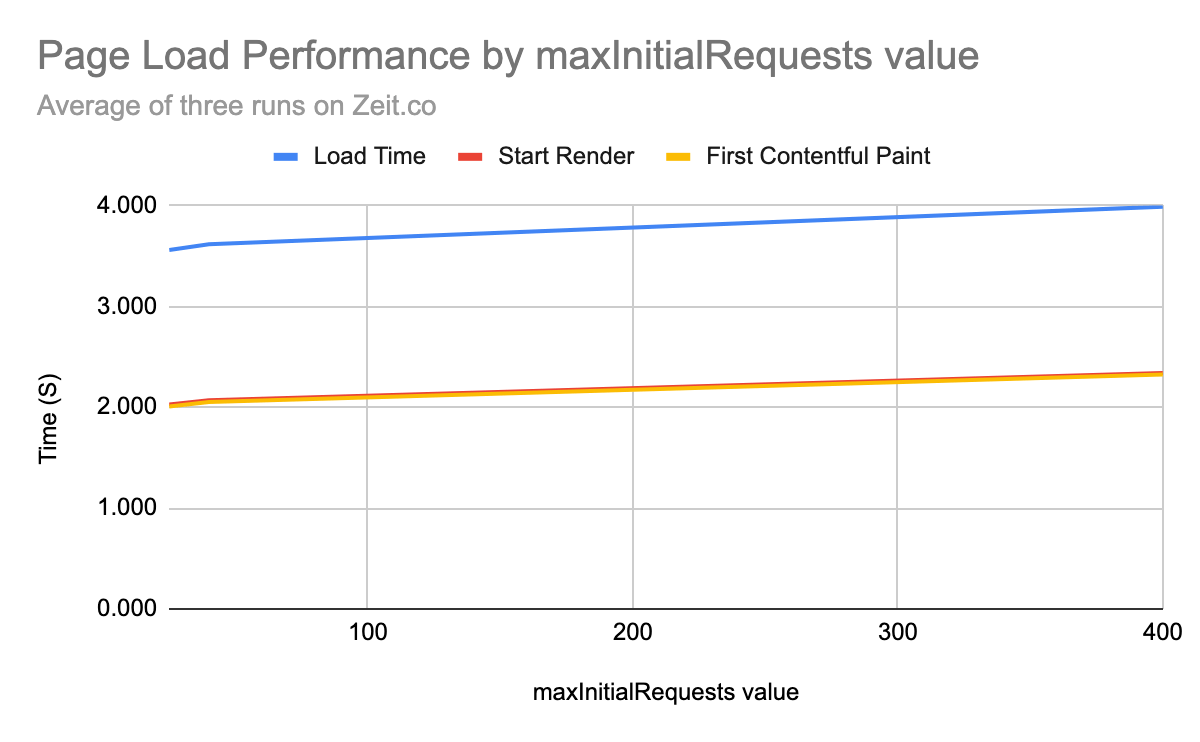 This showed that staying under a reliable threshold (20~25 requests) struck the right balance between loading performance and caching efficiency. After some baseline testing, 25 was selected as the maxInitialRequest count.

Modifying the maximum number of requests that happen in parallel resulted in more than a single shared bundle, and separating them appropriately for each entry point significantly reduced the amount of unneeded code for the same page. 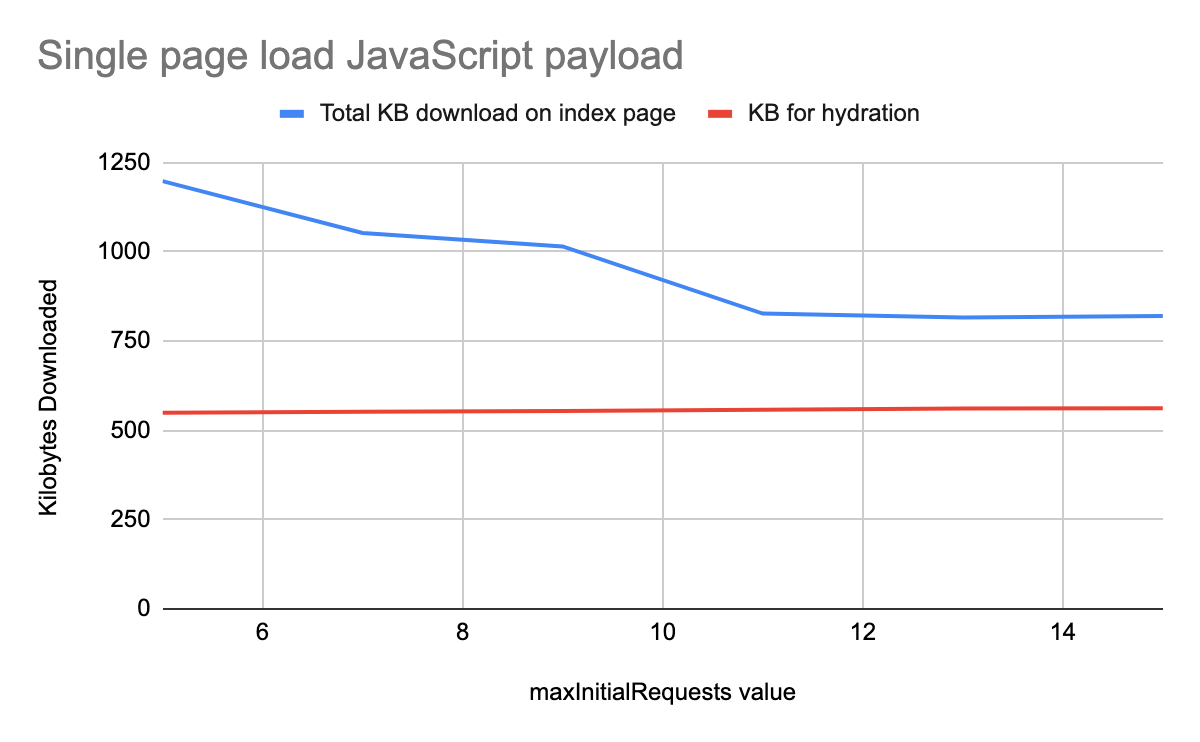 This experiment was only about modifying the number of requests to see if there would be any negative effect on page load performance. The results suggest that setting maxInitialRequests to 25 on the test page was optimal because it reduced the JavaScript payload size without slowing down the page. The total amount of JavaScript that was needed to hydrate the page still remained about the same, which explains why page load performance didn't necessarily improve with the reduced amount of code.

webpack uses 30 KB as a default minimum size for a chunk to be generated. However, coupling a maxInitialRequests value of 25 with a 20 KB minimum size instead resulted in better caching.

Many frameworks, including Next.js, rely on client-side routing (handled by JavaScript) to inject newer script tags for every route transition. But how do they predetermine these dynamic chunks at build time?

This newer granular chunking strategy was first rolled out in Next.js behind a flag, where it was tested on a number of early adopters. Many saw significant reductions to the total JavaScript used for their entire site:

The final version was shipped by default in version 9.2.

Gatsby used to follow the same approach of using a usage-based heuristic for defining common modules:

By optimizing their webpack configuration to adopt a similar granular chunking strategy, they also noticed sizeable JavaScript reductions in many large sites:

Take a look at the PR to understand how they implemented this logic into their webpack configuration, which is shipped by default in v2.20.7.

The concept of shipping granular chunks is not specific to Next.js, Gatsby or even webpack. Everyone should consider improving their application's chunking strategy if it follows a large "commons" bundle approach, regardless of the framework or module bundler used.