The first part of this article discusses tooling for debugging layout shifts, while the second part discusses the thought process to use when identifying the cause of a layout shift.

When running this script be aware that:

Information about layout shifts is reported using a combination of two APIs: the LayoutShift and LayoutShiftAttribution interfaces. Each of these interfaces are explained in more detail in the following sections.

Each layout shift is reported using the LayoutShift interface. The contents of an entry look like this:

These are the properties of a LayoutShift instance that are most relevant to debugging layout shifts:

The Web Vitals Extension can log layout shift info to the console. To enable this feature, go to Options > Console Logging.

The LayoutShiftAttribution interface describes a single shift of a single DOM element. If multiple elements shift during a layout shift, the sources property contains multiple entries.

For example, the JSON below corresponds to a layout shift with one source: the downward shift of the &LTdiv id='banner'> DOM element from y: 76 to y:246.

The node property identifies the HTML element that shifted. Hovering on this property in DevTools highlights the corresponding page element.

The previousRect and currentRect properties report the size and position of the node.

Layout Instability API currently does not ignore elements that shifted but were not visible due to another element being positioned in front of them. Use display: none, visibility: hidden, or opacity: 0 to avoid layout shifts in cases where you need to run layout on some elements before you make them visible to the user.

One of the most important things to understand when interpreting these outputs is that elements listed as sources are the elements that shifted during the layout shift. However, it's possible that these elements are only indirectly related to the "root cause" of layout instability. Here are a few examples. 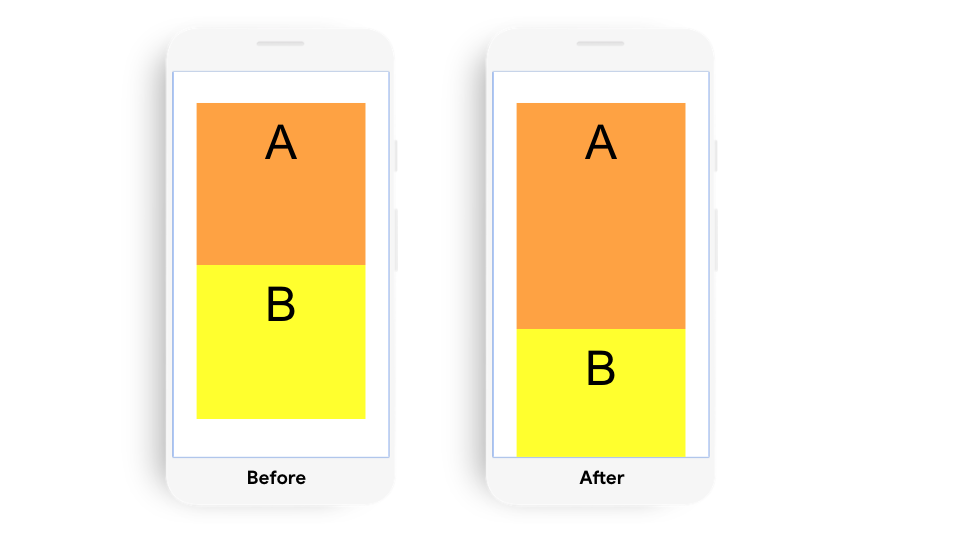 The layout shift in this example would be reported with two sources: element A and element B. The root cause of this layout shift is the change in position of element A. 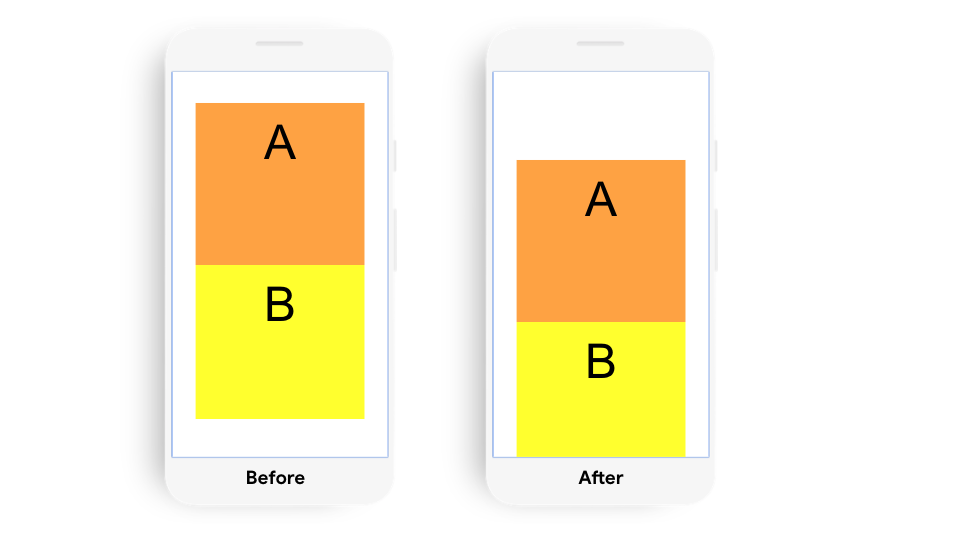 The layout shift in this example would be reported with one source: element B. Changing the position of element B resulted in this layout shift. 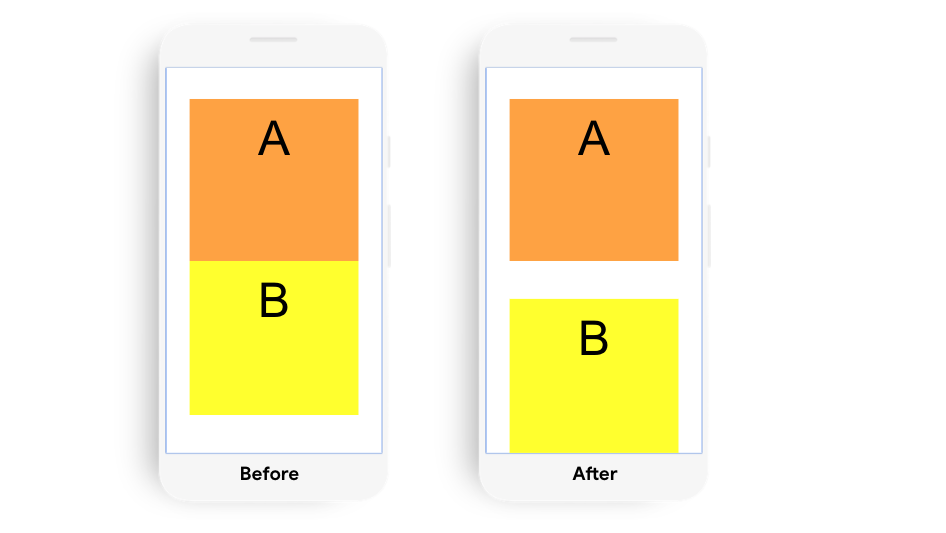 Although element B changes size, there is no layout shift in this example. 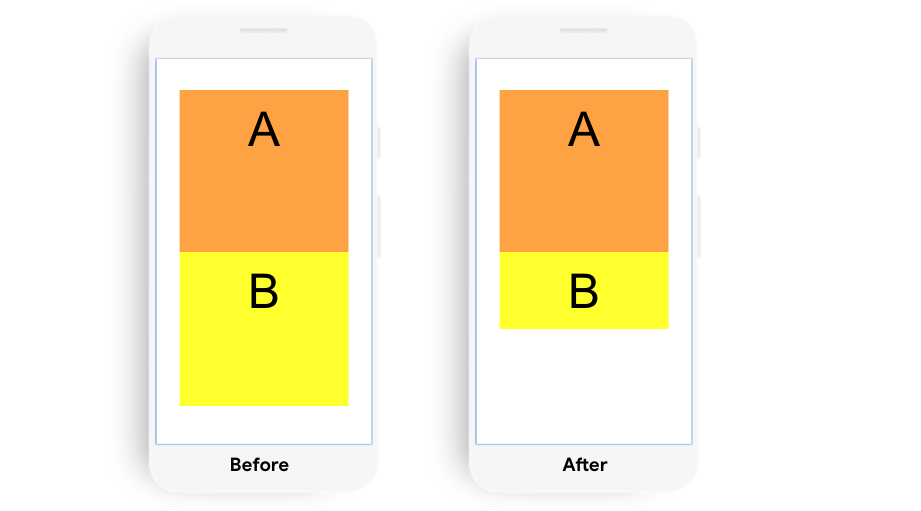 Check out a demo of how DOM changes are reported by the Layout Instability API. 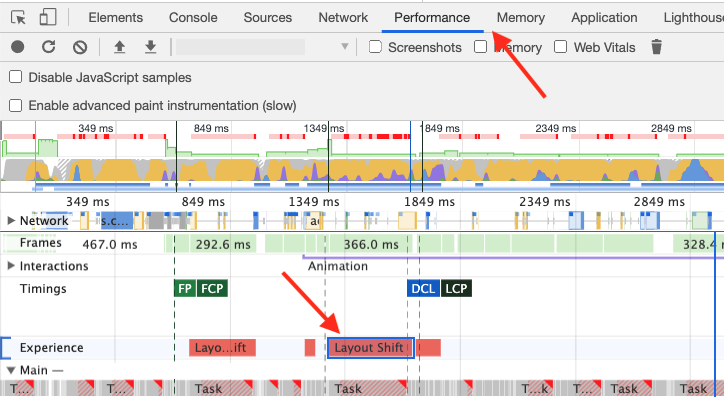 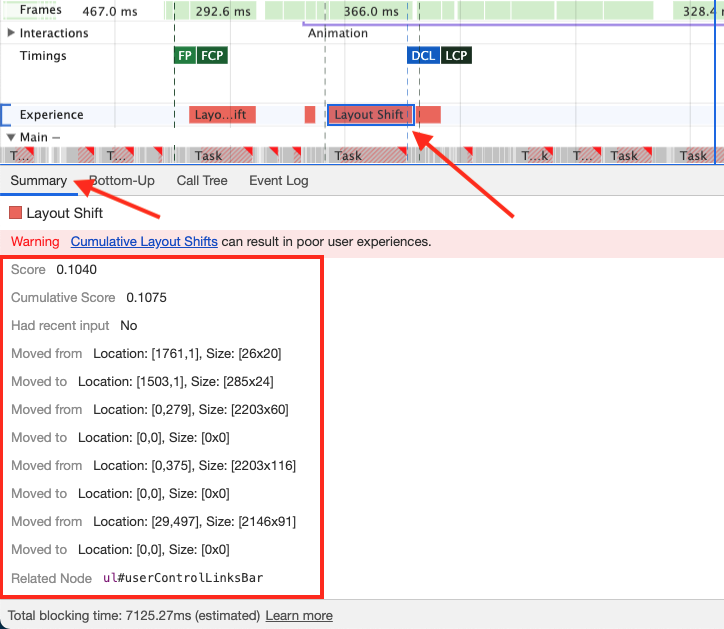 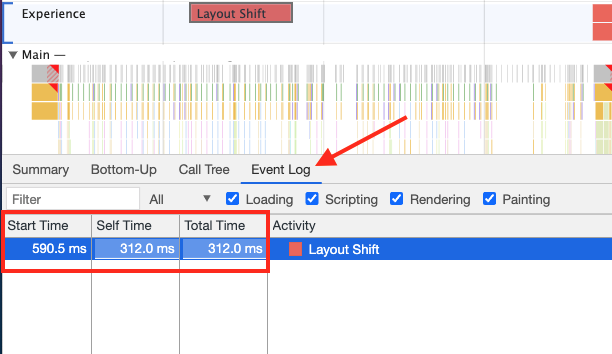 For more information on using the Performance panel, refer to Performance Analysis Reference.

Highlighting layout shift regions can be a helpful technique for getting a quick, at-a-glance feel for the location and timing of the layout shifts occurring on a page.

Thought process for identifying the cause of layout shifts #

You can use the steps below to identify the cause of layout shifts regardless of when or how the layout shift occurs. These steps can be supplemented with running Lighthouse—however, keep in mind that Lighthouse can only identify layout shifts that occurred during the initial page load. In addition, Lighthouse also can only provide suggestions for some causes of layout shifts—for example, image elements that do not have explicit width and height.

Identifying the cause of a layout shift #

Layout shifts can be caused by the following events:

In particular, the DOM element immediately preceding the shifted element is the element most likely to be involved in "causing" layout shift. Thus, when investigating why a layout shift occurred consider:

If the preceding element did not cause the layout shift, continue your search by considering other preceding and nearby elements.

These are some of the specific behaviors that most frequently cause layout shift events:

This type of change is often a result of:

Changes to the dimensions of an element #

This type of change is often a result of:

The insertion or removal of DOM elements #

This is often the result of:

Some animation effects can trigger layout. A common example of this is when DOM elements are 'animated' by incrementing properties like top or left rather than using CSS's transform property. Read How to create high-performance CSS animations for more information.

You can't fix layout shifts that you can't reproduce. One of the simplest, yet most effective things you can do to get a better sense of your site's layout stability is take 5-10 minutes to interact with your site with the goal triggering layout shifts. Keep the console open while doing this and use the Layout Instability API to report on layout shifts.

Lastly, for layout issues that aren't reproducible in development, consider using the Layout Instability API in conjunction with your front-end logging tool of choice to collect more information on these issues. Check out the example code for how to track the largest shifted element on a page.