This article discusses performance best practices for fonts. There are a variety of ways in which web fonts impact performance:

This article is broken down into three sections: font loading, font delivery, and font rendering. Each section explains how that particular aspect of the font lifecycle works and provides corresponding best practices.

Fonts are typically important resources, as without them the user might be unable to view page content. Thus, best practices for font loading generally focus on making sure that fonts get loaded as early as possible. Particular care should be given to fonts loaded from third-party sites as downloading these font files requires separate connection setups.

If you're unsure if your page's fonts are being requested in time, check the Timing tab within the Network panel in Chrome DevTools for more information. 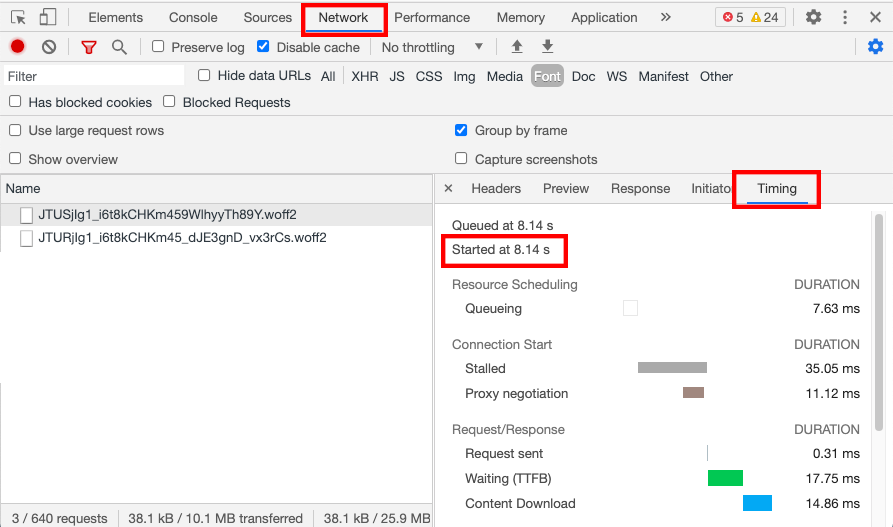 Before diving into best practices for font loading it's important to understand how @font-face works and how this impacts font loading.

The @font-face declaration is an essential part of working with any web font. At a minimum, it declares the name that will be used to refer to the font and indicates the location of the corresponding font file.

In other words, in the example above, Open Sans would only be downloaded if the page contained a &LTh1> element.

Thus, when thinking about font optimization, it's important to give stylesheets just as much consideration as the font files themselves. Changing the contents or delivery of stylesheets can have a significant impact on when fonts arrive. Similarly, removing unused CSS and splitting stylesheets can reduce the number of fonts loaded by a page.

Note that if only some of the CSS is inlined, then the browser will still need to wait for all the CSS to be loaded, before it can discover if fonts are needed.

Also note that inlining the font files themselves is not recommended. Inlining large resources like fonts is likely to delay the delivery of the main document, and with it, the discovery of other resources.

Inlining critical CSS can be a more advanced technique that not all sites will be able to achieve. The performance benefits are clear, but it requires additional processes and build tools to ensure the necessarily CSS—and ideally only the critical CSS—is inlined correctly and that any additional CSS is delivered in a non-render blocking fashion.

If your site loads fonts from a third-party site, it is highly recommended that you use the preconnect resource hint to establish early connection(s) with the third-party origin. Resource hints should be placed in the &LThead> of the document. The resource hint below sets up a connection for loading the font stylesheet.

To preconnect the connection that is used to download the font file, add a separate preconnect resource hint that uses the crossorigin attribute. Unlike stylesheets, font files must be sent over a CORS connection.

Google Fonts provides the option to load fonts via &LTlink> tags or an @import statement. The &LTlink> code snippet includes a preconnect resource hint and therefore will likely result in faster stylesheet delivery than using @import version. These &LTlink> tags should be placed as early in the document as possible.

Be cautious when using preload to load fonts #

Although preload is highly effective at making fonts discoverable early in the page load process, this comes at the cost of taking away browser resources from the loading of other resources.

Inlining font declarations and adjusting stylesheets may be a more effective approach. These adjustments come closer to addressing the root cause of late-discovered fonts—rather than just providing a workaround.

In addition, using preload as a font-loading strategy should also be used carefully as it bypasses some of the browser's built-in content negotiation strategies. For example, preload ignores unicode-range declarations, and if used prudently, should only be used to load a single font format.

However, when using external stylesheets, preloading the most important fonts can be very effective since the browser will not otherwise discover whether the font is needed until much later.

On paper, using a self-hosted font should deliver better performance as it eliminates a third-party connection setup. However, in practice, the performance differences between these two options is less clear cut: for example, the Web Almanac found that sites using third-party fonts had a faster render than fonts that used first-party fonts.

If you're unsure if using self-hosted fonts will deliver better performance, try serving a font file from your own servers and compare the transfer time (including connection setup) with that of a third-party font. If you have slow servers, don't use a CDN, or don't use HTTP/2 it becomes less likely that the self-hosted font will be more performant.

If you use a self-hosted font, it is recommended that you also apply some of the font file optimizations that third-party font providers typically provide automatically—for example, font subsetting and WOFF2 compression. The amount of effort required to apply these optimizations will depend somewhat on the languages that your site supports. In particular, be aware that optimizing fonts for CJK languages can be particularly challenging.

Of the modern font fonts, WOFF2 is the newest, has the widest browser support, and offers the best compression. Because it uses Brotli, WOFF2 compresses 30% better than WOFF, leading to less data to download and therefore faster performance.

Given the browser support, experts now recommend only using WOFF2:

In fact, we think it is also time to proclaim: Use only WOFF2 and forget about everything else.

This will simplify your CSS and workflow massively and also prevents any accidental double or incorrect font downloads. WOFF2 is now supported everywhere. So, unless you need to support really ancient browsers, just use WOFF2. If you can't, consider not serving any web fonts to those older browsers at all. This will not be a problem if you have a robust fallback strategy in place. Visitors on older browsers will simply see your fallback fonts.

Bram Stein, from the 2022 Web Almanac

Font files typically include a large number of glyphs for all the various characters they support. But you may not need all the characters on your page and can reduce the size of font files by subsetting fonts.

The unicode-range descriptor in the @font-face declartion informs the browser which characters a font can be used for.

A font file will be downloaded if the page contains one or more characters matching the unicode range. unicode-range is commonly used to serve different font files depending on the language used by page content.

unicode-range is often used in conjunction with the technique of subsetting. A subset font includes a smaller portion of the that were contained in the original font file. For example, rather than serve all characters to all users, a site might generate separate subset fonts for Latin and Cyrillic characters. The number of glyphs per font varies wildly: Latin fonts are usually on the magnitude of 100 to 1000 glyphs per font; CJK fonts may have over 10,000 characters. Removing unused glyphs can significantly reduce the filesize of a font.

Some font providers may provide different versions of fonts files with different subsets automatically. For example, Google Fonts does this by default:

When moving to self-hosting, this is an optimization that can easily be missed and lead to larger font files locally.

It is also possible to manually subset fonts if your font provider allows this, either through an API (Google Fonts supports this by providing a text parameter), or by manually editing the font files and then self-hosting. Tools for generating font subsets include subfont and glyphanger. However, do check the licence for the fonts you use allow subsetting and self-hosting.

The fastest font to deliver is a font that isn't requested in the first place. System fonts and variable fonts are two ways to potentially reduce the number of web fonts used on your site.

A system font is the default font used by the user interface of a user's device. System fonts typically vary by operating system and version. Because the font is already installed, the font does not need to be downloaded. System fonts can work particularly well for body text.

To use the system font in your CSS, list system-ui as the font-family:

The idea behind variable fonts is that a single variable font can be used as a replacement for multiple font files. Variable fonts work by defining a "default" font style and providing "axes" for manipulating the font. For example, a variable font with a Weight axis could be used to implement lettering that would previously require separate fonts for light, regular, bold, and extra bold.

We often refer to "Times New Roman" and "Helvetica" as fonts. However, technically speaking, these are font families. A family is composed of styles, which are particular variations of the typeface (for example, light, medium, or bold italic). A font file contains a single style unless it is a variable font. A typeface is the underlying design, which can be expressed as digital fonts—and in physical type, like carved woodblocks or metal.

Not everyone will benefit from switching to variable fonts. Variable fonts contain many styles, so typically have larger file sizes than individual non-variable fonts that only contain one style. Sites that will see the largest improvement from using variable fonts are those that use (and need to use) a variety of font styles and weights.

This behavior can be configured by using the font-display attribute. This choice can have significant implications: font-display has the potential to impact LCP, FCP, and layout stability.

font-display informs the browser how it should proceed with text rendering when the associated web font has not loaded. It is defined per font-face.

There are five possible values for font-display:

font-display strategies reflect different viewpoints about the tradeoff between performance and aesthetics. As such it's difficult to give a recommended approach as it does depend on individual preferences, how important the web font is to the page and brand, and how jarring a late-arriving font can be when swapped in.

For most sites, these are the three strategies that will be most applicable:

font-display: auto, font-display: block, font-display: swap, and font-display: fallback all have the potential to cause layout shifts when the font is swapped. However, of these approaches, font-display: swap will delay text render the least. Thus, it can be the preferred approach for situations where it is important that text is displayed as quickly as possible, but ultimately gets rendered as a web font.

Also keep in mind that these two approaches can be combined: for example, use font-display: swap for branding and other visually distinctive page elements; use font-display: optional for fonts used in body text.

The font-display strategies that work well for traditional web fonts don't work nearly as well for icon fonts. The fallback font for an icon font typically looks significantly different than the icon font and its characters may convey a completely different meaning. As a result, icon fonts are more likely to cause significant layout shifts. In addition, using a fallback font may not be practical. If possible, it's best to replace icon fonts with SVG (this is also better for accessibility). Newer versions of popular icon fonts typically support SVG. For more information on switching to SVG, see Font Awesome and Material Icons.

Reduce the shift between your fallback font and your webfont #

To reduce the CLS impact, you can use the new size-adjust attributes. For more information see this article. This is a very new addition to our toolset, so is more advanced and a bit manual at present. But definitely one to experiment with and watch for tooling improvements in the future!

Web fonts still be a performance bottleneck but we have an ever-growing range of options to allow us to optimize them to reduce this bottleneck as much as possible.