Many browsers now have the ability to access video and audio input from the user. However, depending on the browser it might be a full dynamic and inline experience, or it could be delegated to another app on the user's device. On top of that, not every device even has a camera. So how can you create an experience that uses a user generated image that works well everywhere?

If you want to progressively enhance your experience, you need to start with something that works everywhere. The easiest thing to do is simply ask the user for a pre-recorded file.

This is the best supported but least satisfying option. Get the user to give you a URL, and then use that. For just displaying the image this works everywhere. Create an img element, set the src and you're done.

Though, if you want to manipulate the image in any way, things are a bit more complicated. CORS prevents you from accessing the actual pixels unless the server sets the appropriate headers and you mark the image as crossorigin ; the only practical way around that is to run a proxy server.

You can also use a simple file input element, including an accept filter that indicates you only want image files.

This method works on all platforms. On desktop it will prompt the user to upload an image file from the file system. In Chrome and Safari on iOS and Android this method will give the user a choice of which app to use to capture the image, including the option of taking a photo directly with the camera or choosing an existing image file. 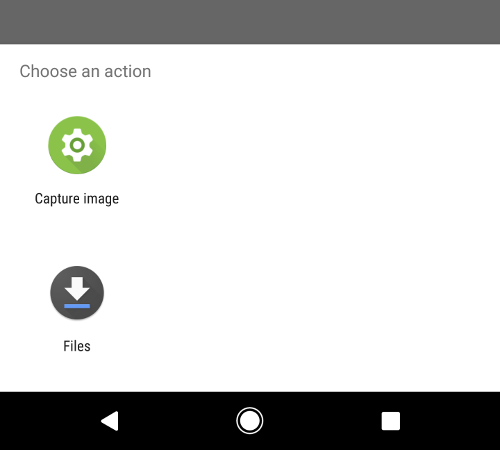 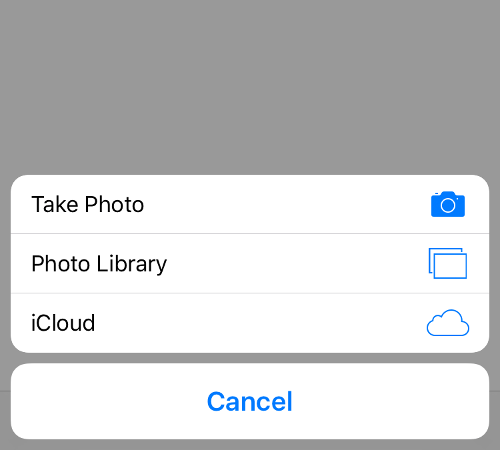 The data can then be attached to a &LTform> or manipulated with JavaScript by listening for an onchange event on the input element and then reading the files property of the event target.

The files property is a FileList object, which I'll talk more about later.

You can also optionally add the capture attribute to the element, which indicates to the browser that you prefer getting an image from the camera.

Adding the capture attribute without a value let's the browser decide which camera to use, while the "user" and "environment" values tell the browser to prefer the front and rear cameras, respectively.

The capture attribute works on Android and iOS, but is ignored on desktop. Be aware, however, that on Android this means that the user will no longer have the option of choosing an existing picture. The system camera app will be started directly, instead.

If you are already adding the ability to upload a file, there are a couple of easy ways that you can make the user experience a little richer.

The first is to add a drop target to your page that allows the user to drag in a file from the desktop or another application.

Similar to the file input, you can get a FileList object from the dataTransfer.files property of the drop event;

The dragover event handler lets you signal to the user what will happen when they drop the file by using the dropEffect property.

Drag and drop has been around for a long time and is well-supported by the major browsers.

The final way to get an existing image file is from the clipboard. The code for this is very simple, but the user experience is a little harder to get right.

(e.clipboardData.files is yet another FileList object.)

The tricky part with the clipboard API is that, for full cross-browser support, the target element needs to be both selectable and editable. Both &LTtextarea> and &LTinput type="text"> fit the bill here, as do elements with the contenteditable attribute. But these are also obviously designed for editing text.

It can be difficult to make this work smoothly if you don't want the user to be able to input text. Tricks like having a hidden input that gets selected when you click on some other element may make maintaining accessibility harder.

Since most of the above methods produce a FileList, I should talk a little about what that is.

A FileList is similar to an Array. It has numeric keys and a length property, but it isn't actually an array. There are no array methods, like forEach() or pop(), and it isn't iterable. Of course, you can get a real Array by using Array.from(fileList).

The entries of the FileList are File objects. These are exactly the same as Blob objects except that they have additional name and lastModified read-only properties.

This example finds the first file that has an image MIME type, but it could also handle multiple images being selected/pasted/dropped at once.

Once you have access to the file you can do anything you want with it. For example, you can:

Now that you've covered your bases, it's time to progressively enhance!

Modern browsers can get direct access to cameras, allowing you to build experiences that are fully integrated with the web page, so the user need never leave the browser.

You can directly access a camera and microphone by using an API in the WebRTC specification called getUserMedia(). This will prompt the user for access to their connected microphones and cameras.

It's very simple to detect support, however.

Direct access to the camera is a powerful feature. It requires consent from the user, and your site MUST be on a secure origin (HTTPS).

When you call getUserMedia(), you need to pass in an object that describes what kind of media you want. These choices are called constraints. There are a several possible constraints, covering things like whether you prefer a front- or rear-facing camera, whether you want audio, and your preferred resolution for the stream.

To get data from the camera, however, you need just one constraint, and that is video: true.

If successful the API will return a MediaStream that contains data from the camera, and you can then either attach it to a &LTvideo> element and play it to show a real time preview, or attach it to a &LTcanvas> to get a snapshot.

By itself, this isn't that useful. All you can do is take the video data and play it back. If you want to get an image, you have to do a little extra work.

Your best supported option for getting an image is to draw a frame from the video to a canvas.

Unlike the Web Audio API, there isn't a dedicated stream processing API for video on the web so you have to resort to a tiny bit of hackery to capture a snapshot from the user's camera.

The process is as follows:

Once you have data from the camera stored in the canvas you can do many things with it. You could:

Stop streaming from the camera when not needed #

It is good practice to stop using the camera when you no longer need it. Not only will this save battery and processing power, it will also give users confidence in your application.

To stop access to the camera you can simply call stop() on each video track for the stream returned by getUserMedia().

Ask permission to use camera responsibly #

If the user has not previously granted your site access to the camera then the instant that you call getUserMedia() the browser will prompt the user to grant your site permission to the camera.

Users hate getting prompted for access to powerful devices on their machine and they will frequently block the request, or they will ignore it if they don't understand the context for which the prompt has been created. It is best practice to only ask to access the camera when first needed. Once the user has granted access they won't be asked again. However, if the user rejects access, you can't get access again, unless they manually change camera permission settings.

Asking for access to the camera on page load will result in most of your users rejecting access to it.