The Oculus Quest 2 is a virtual reality (VR) headset created by Oculus, a division of Meta. It is the successor to the company's previous headset, the Oculus Quest. The device is capable of running as both a standalone headset with an internal, Android-based operating system, and with Oculus-compatible VR software running on a desktop computer when connected over USB or Wi-Fi. It uses the Qualcomm Snapdragon XR2 system on a chip with 6 GB of RAM. The Quest 2's display is a singular fast-switch LCD panel with 1,832 × 1,920 pixels per eye resolution that runs at a refresh rate of up to 120 Hz.

Currently there are three browsers available for the Oculus Quest 2: Wolvic, a successor to Firefox Reality, and the built-in Oculus Browser. This article focuses on the latter. The Oculus website introduces the Oculus Browser as follows.

"Oculus Browser provides support for the latest web standards and other technologies to help you create VR experiences on the web. Today's 2D web sites work great in Oculus Browser because it's powered by the Chromium rendering engine. It's further optimized for Oculus headsets to get the best performance and to enable web developers take advantage of the full potential of VR with new APIs, like WebXR. Through WebXR, we're opening the doors to the next frontier of the web." 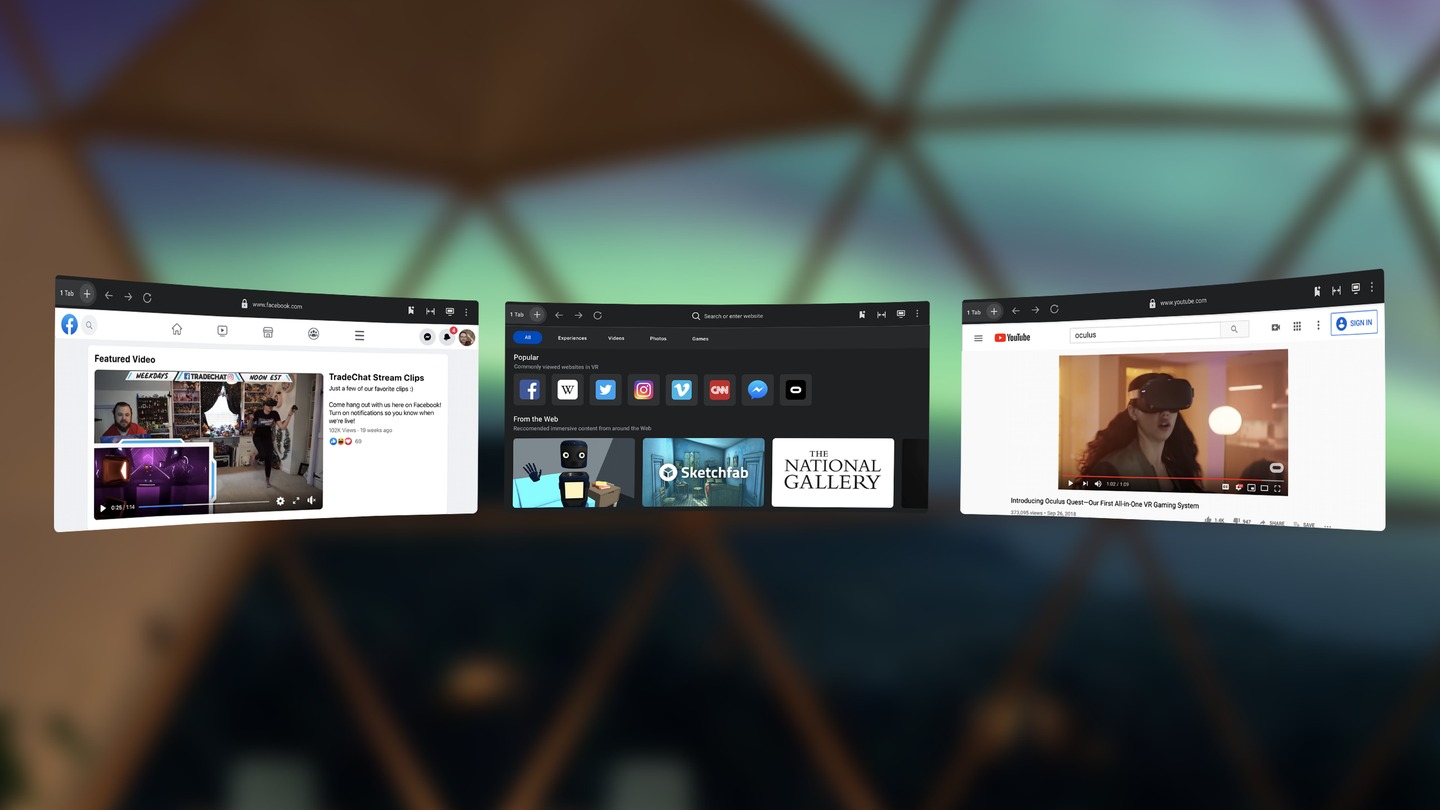 The browser's user agent string at the time of writing is as follows. 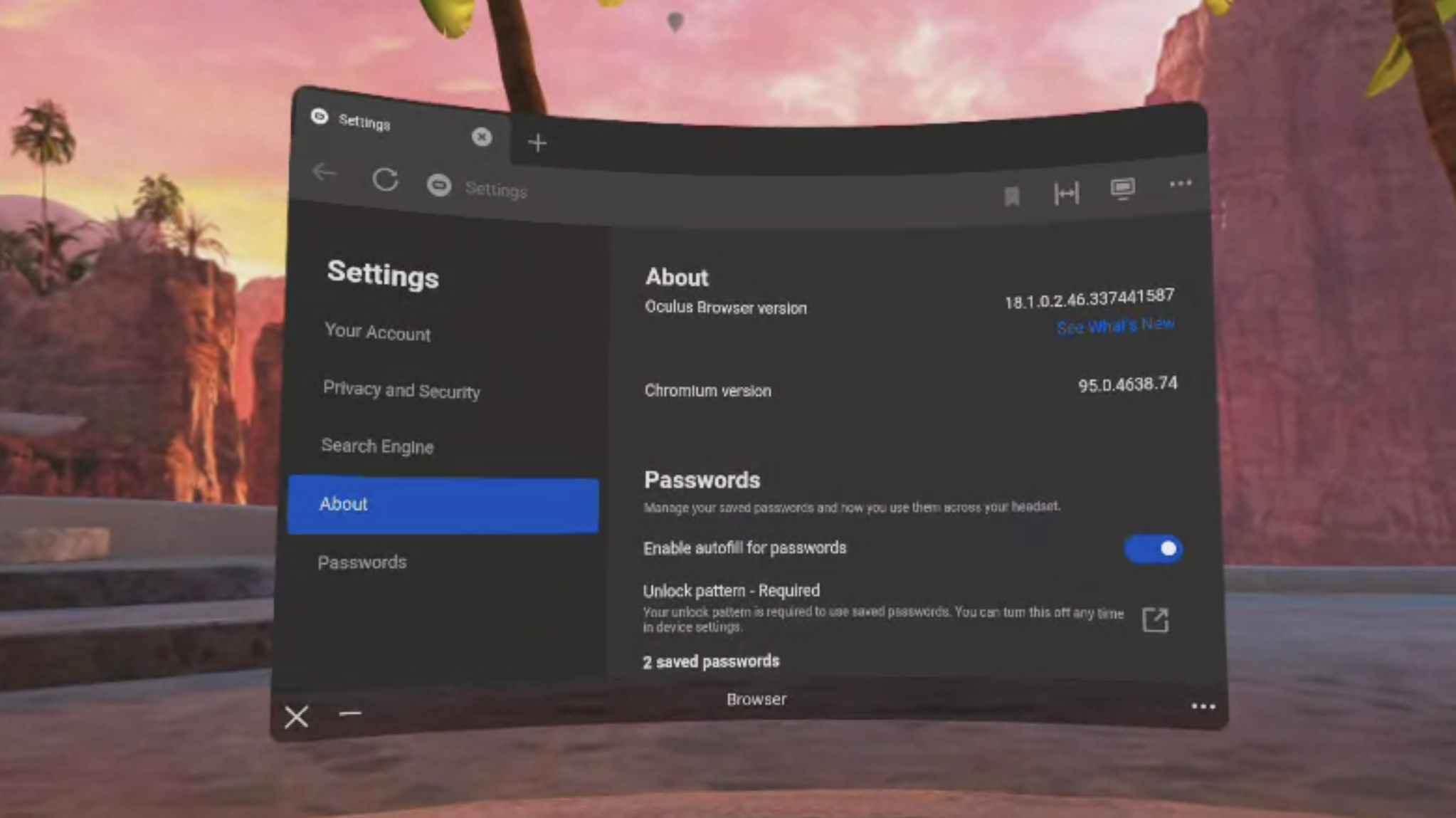 The browser's user interface (shown above) has the following features (top row from left to right):

PWAs in Oculus Browser and the Oculus Store #

On October 28, 2021, Jacob Rossi, Product Management Lead at Meta (Oculus), shared that PWAs were coming to Oculus Quest and Oculus Quest 2. In the following, I describe the PWA experience on Oculus and explain how to build, sideload, and test your PWA on the Oculus Quest 2.

Login state is shared between Oculus Browser and PWAs, allowing users to seamlessly switch between the two. Naturally, Facebook Login is supported out of the box. The Oculus Browser includes a password manager that allows users to store and share their passwords securely between the browser and installed app experiences.

PWAs can be controlled with the Oculus left and right controllers, Bluetooth mice and keyboards, and via hand tracking. Scrolling works via the thumb sticks on the Oculus controllers, or by pinching the thumb and the index finger and moving in the desired direction. To select something, the user can point and pinch.

Permissions in Oculus Browser work pretty much the same way as in Chrome. The state is shared between apps running in the browser and installed PWAs, so users can switch between the two experiences without having to grant the same permissions again.

Albeit many permissions are implemented, not all features are supported. For example, while requesting the geolocation permission succeeds, the device never actually gets a location. Similarly, the various hardware APIs like WebHID, Web Bluetooth, etc. all pass feature detection, but don't actually show a picker that would let the user pair the Oculus with a hardware device. I suppose feature detectability of APIs will be refined once the browser matures. 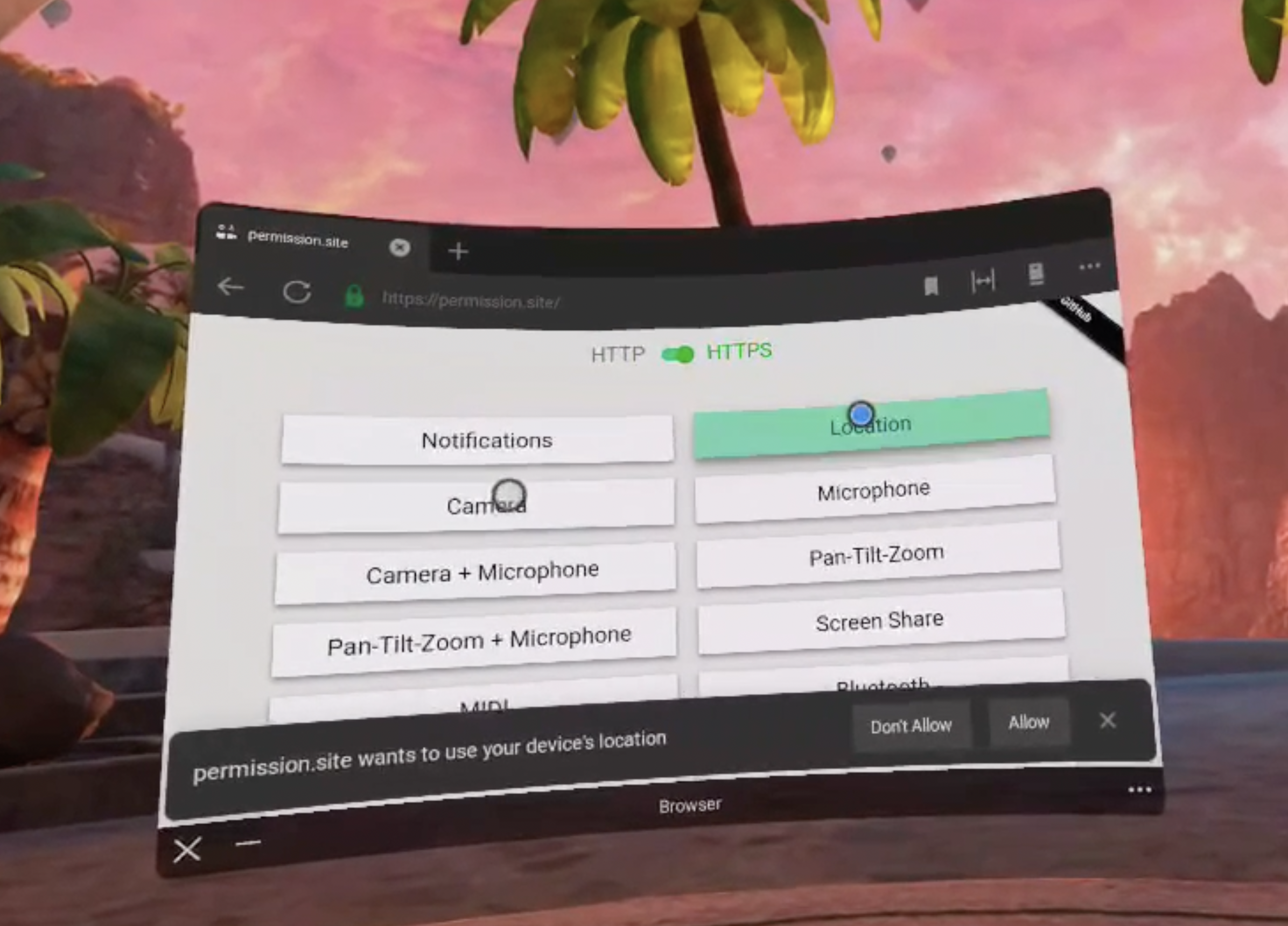 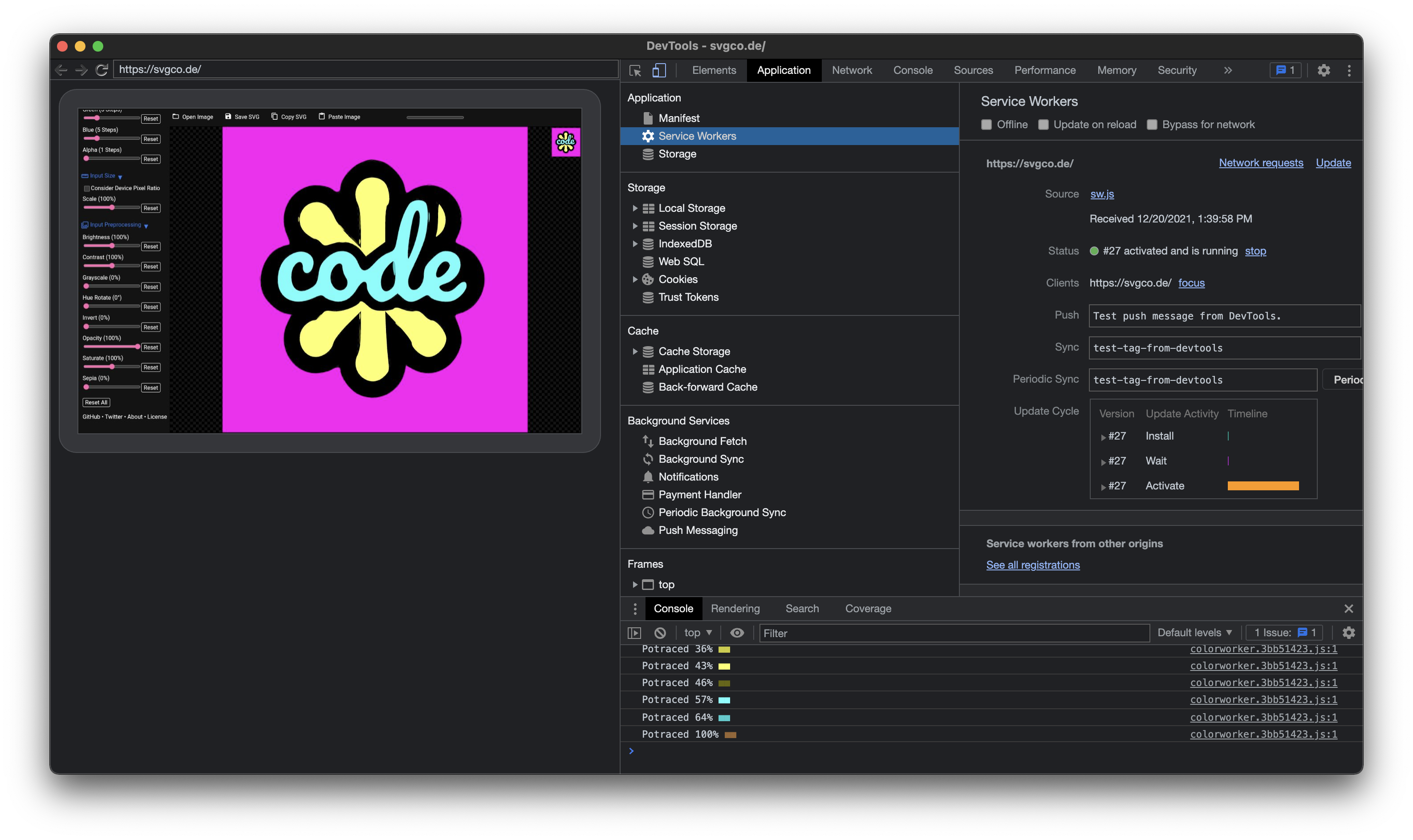 Currently the BeforeInstallPrompt event will not fire in Oculus Browser, despite feature detection reporting it to be supported. 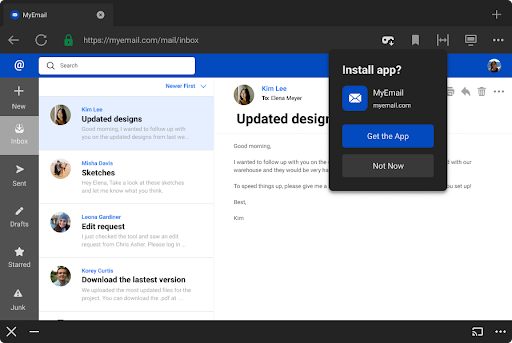 Exemplary PWAs on the Oculus Quest 2 #

Multiple Meta divisions have created PWAs for the Oculus Quest 2, for example Instagram and Facebook. These PWAs run in standalone app windows that don't have a URL bar and that can be freely resized. 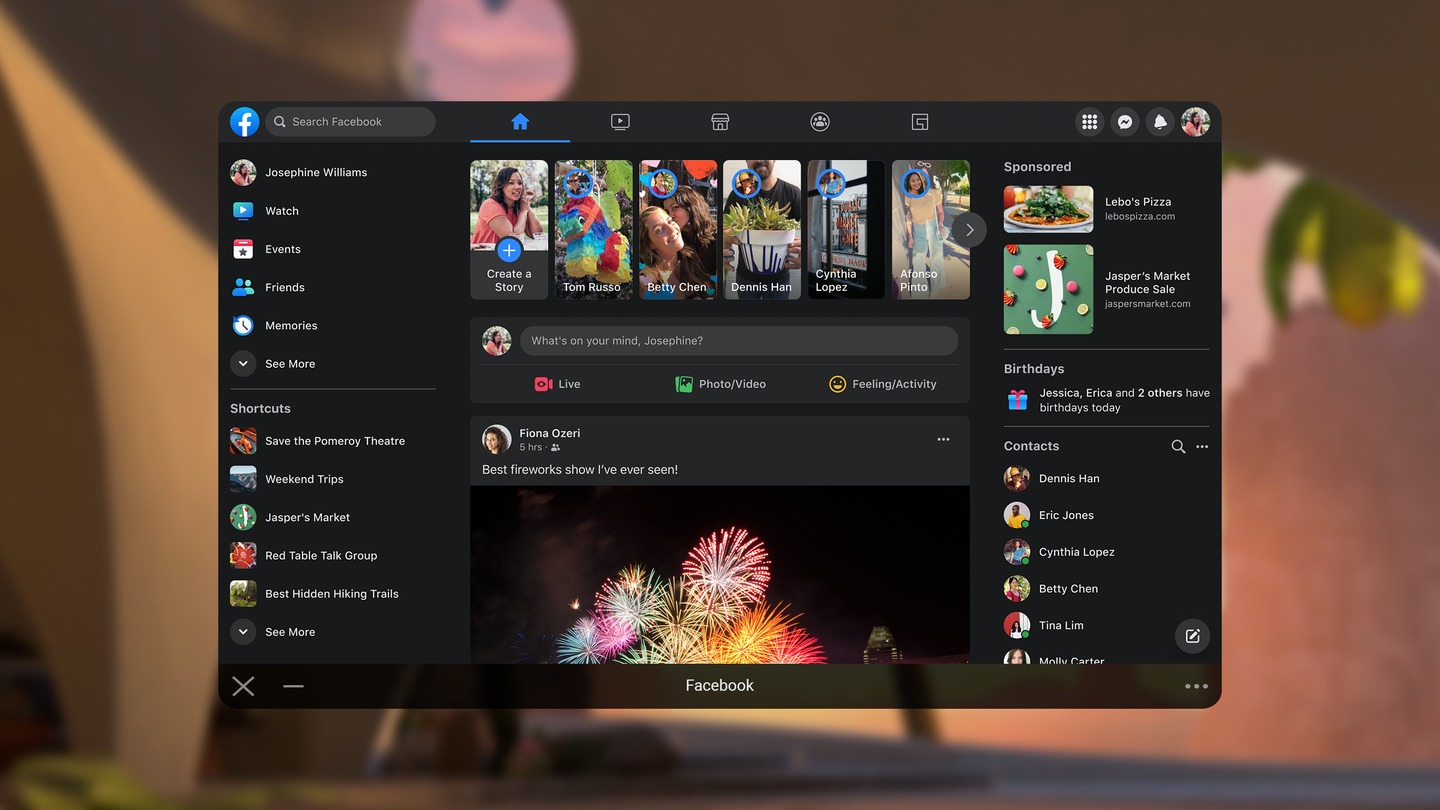 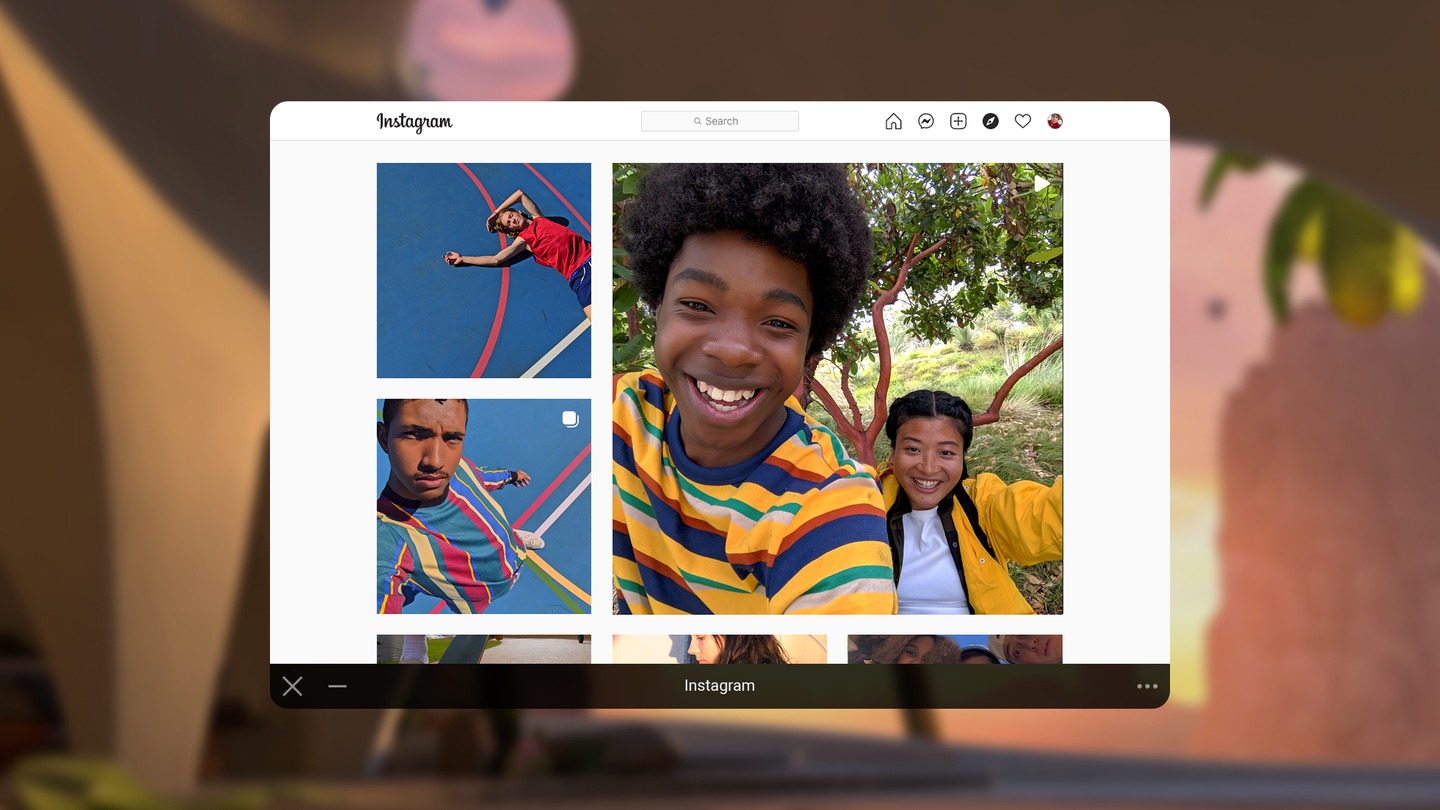 PWAs by other developers #

At the time of this writing, there is a small but growing number of PWAs for the Oculus Quest 2 on the Oculus Store. Spike lets users experience all the essential work tools like email, chat, calls, notes, tasks, and to-dos from their inbox in a virtual environment hub right in the Spike app. 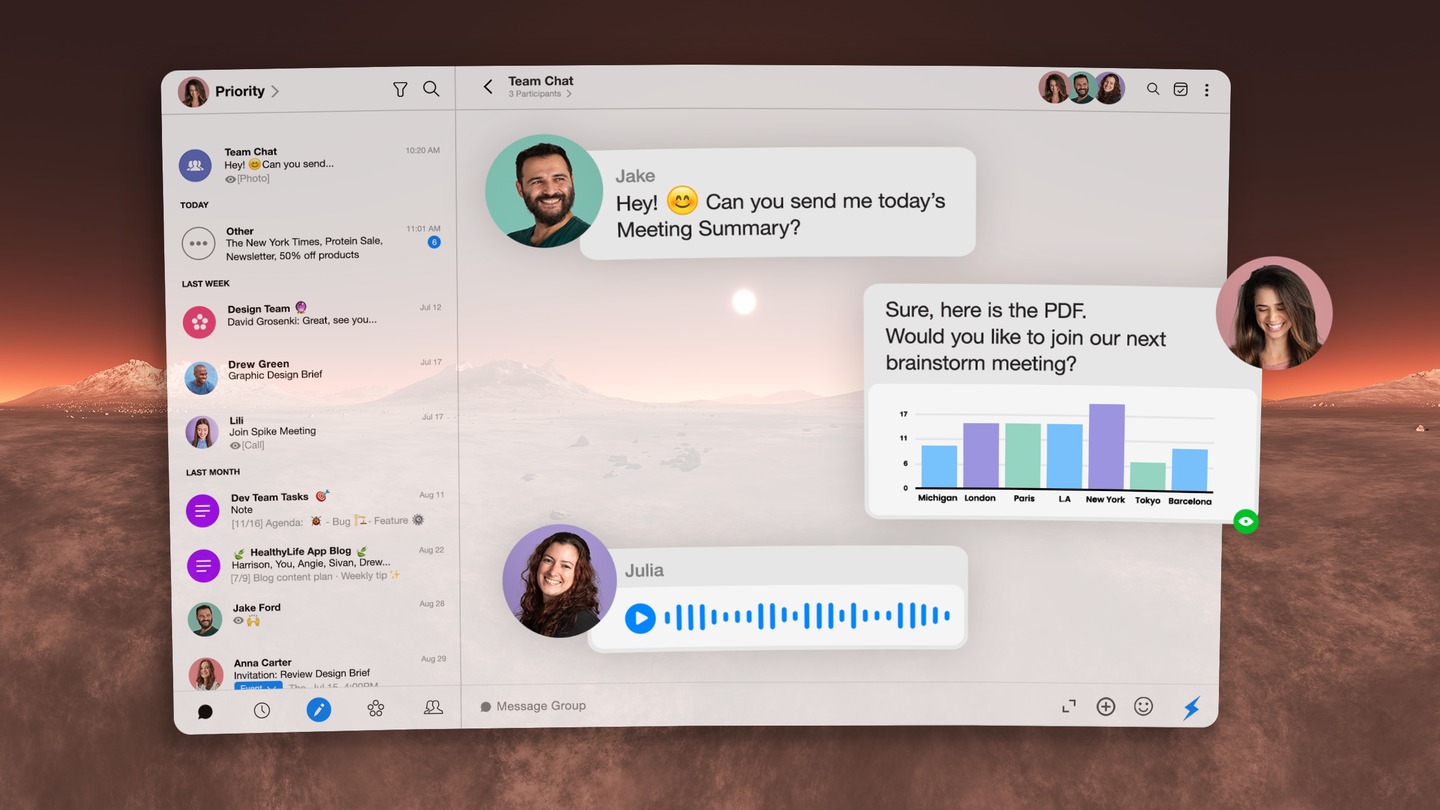 Another example is Smartsheet, a dynamic workspace that provides project management, automated workflows, and rapid building of new solutions.

More PWAs like Slack, Dropbox, or Canva are coming, as teased in a video featuring Jacob Rossi that was released in the context of Facebook's Connect conference in 2021.

Meta outlined the required steps in their documentation. In general, PWAs that are installable in Chrome should oftentimes work out of the box on Oculus.

There are some important differences compared to Chrome's installability criteria and the Web App Manifest spec. For example, Oculus only supports left-to-right languages at the moment, whereas the Web App Manifest spec enforces no such constraints. Another example is start_url, which Chrome strictly requires for an app to be installable, but which on Oculus is optional. Oculus offers a command line tool that lets developers create PWAs for the Oculus Quest 2, which allows them to pass the missing (or override the existing) parameters in the Web App Manifest.

Oculus has a number of optional proprietary Web App Manifest fields that can be used to customize the PWA experience.

Bubblewrap is an open source set of libraries and a command line tool (CLI) for Node.js. Bubblewrap is developed by the Google Chrome team, to help developers generate, build, and sign an Android project that launches your PWA as a Trusted Web Activity (TWA).

It can generate universal APKs that open a TWA on regular Android devices and Meta Quest Browser on Meta Quest devices, so the APK can be published to the Google Play Store and the Meta Quest Store.

Assuming you have Node.js installed, Bubblewrap CLI can be installed with the following command:

When running Bubblewrap for the first time, it will offer to automatically download and install the required external dependencies—Java Development Kit (JDK) and Android SDK Build Tools.

To generate a Meta Quest compatible Android project that wraps your PWA, run the init command with the --metaquest flag and follow the wizard:

Once the project has been generated, build and sign it by running:

This will output a file called app-release-signed.apk. This file can be installed on the device or uploaded to the Meta Quest Store and the Google Play Store.

Pro tip: you can also use the --chromeosonly flag in addition to the --metaquest flag to make the APK compatible not only with Meta Quest and regular Android devices, but also with ChromeOS devices.

It also allows to package PWAs for Meta Quest devices with the create-pwa command and publish them to Meta Quest Store and App Lab.

Set the output file name via the -o parameter and the path to Android SDK via the --android-sdk parameter.

Point the tool at the live URL of the web app manifest via the --web-manifest-url parameter.

If you don't have a manifest on your live PWA or wish to override the live manifest, you can still generate an APK for your PWA using a local manifest file and the --manifest-content-file parameter.

To leave the manifest as pure as possible, use the --package-name parameter with a value in reverse domain name notation (for example, com.company.app.pwa), rather than adding the proprietary ovr_package_name field to the manifest.

APK files generated by ovr-platform-util are only compatible with Meta Quest devices and cannot be run on regular Android devices.

Using PWABuilder is in the authors' view the easiest and therefore recommended way to package PWAs for Meta Quest at the moment.

PWABuilder is an open source project developed by Microsoft, that allows developers to package and sign their PWAs for publishing to various stores, including Microsoft Store, Google Play Store, App Store, and Meta Quest Store.

Packaging PWAs with PWABuilder is as easy as entering the URL of a PWA, selecting the platform (Meta Quest in this case), entering/editing metadata for the app, and clicking the Generate button. 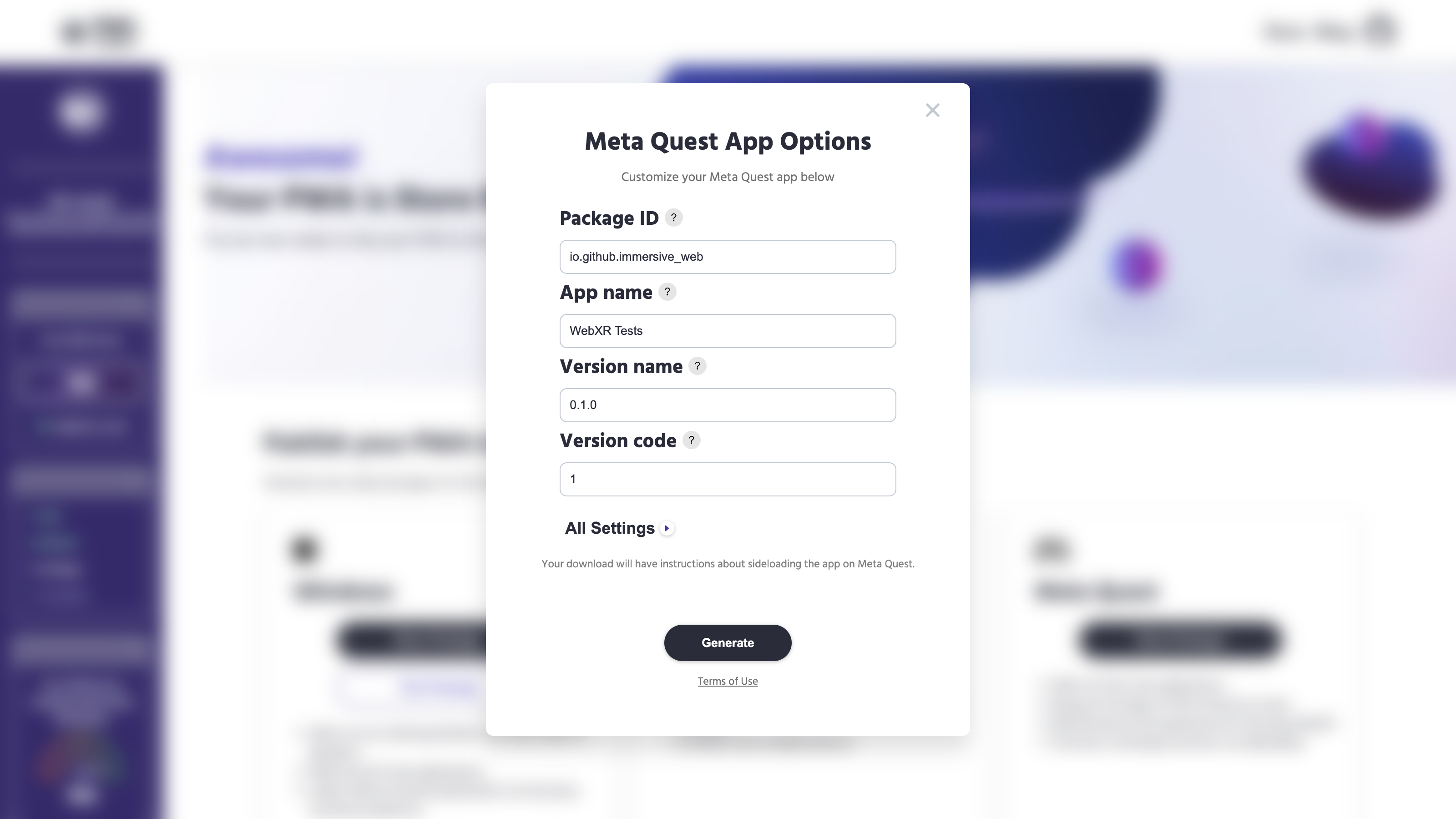 Pro tip: since PWABuilder is a PWA itself that works everywhere there is a browser, you can open it in the Meta Quest Browser and perform all the steps right on your Meta Quest.

PWABuilder uses the ovr-platform-util under the hood to package PWAs for Meta Quest, but the size is smaller thanks to the removal of unused code and resources.

To enable Android Debug Bridge (ADB) on the Meta Quest device, you must enable developer mode in the companion mobile app. Before you can put your device in developer mode, you must belong to (or have created) a developer organization in the Oculus Developer Center.

After creating the APK, developers can sideload it to the Meta Quest device using the ADB via USB or Wi-Fi:

If you use Bubblewrap CLI for packaging PWAs, it provides a convenient alias command to sideload the APK:

Pro tip: you can use Android Web Toolbox to sideload the APK. It's an open source web app that allows you to access all ADB functionality right from the browser even from another Android device. No installation or drivers are required thanks to the Web USB API.

Sideloaded apps appear in an Unknown Sources section in the app drawer.

Submission and consideration for the Oculus Store is only available if you have been approved as an Meta Quest Store developer. Distribution of PWAs via App Lab is not currently available. The Meta team will share more on when and how you can submit a PWA to App Lab soon.

Uploading and submitting PWAs to the Oculus Store is covered in detail in the Oculus Developer Center docs.

Apart from submitting apps to the Oculus Store, developers can also distribute their apps via platforms like SideQuest directly to consumers safely and securely, without requiring store approval. This allows them to get an app directly to end users, even if it is early in development, experimental, or aimed at a unique audience.

Here's a screencast of the test app.

An Oculus version of SVGcode #

To take the instructions for a spin, I created an Oculus version of my most recent PWA, SVGcode. You can download the resulting APK file output.apk from my Google Drive. If you want to investigate the package further, I have a decompiled version, too. Find the build instructions in package.json.

Using the app on Oculus works fine, including the ability to open and save files. The Oculus Browser doesn't support the File System Access API, but the fallback approach helps. The only thing that didn't function is pinch-zooming. My expectation was for it to work by pressing the trigger button on both controllers and then moving the controllers in opposed directions. Other than that, everything else was performant and responsive, as you can see in the embedded screencast.

Wondering how various prompts (PWA install, permission requests, notifications) are handled from within VR, if at all?

As you can see, entering VR mode requires the user's permission. Permissions are asked once per origin. Requesting permissions leaves the immersive mode. Notifications are currently not supported.

You can use your hands to interact with PWAs in immersive mode thanks to the WebXR Hand Input API and Meta's AI-based hand-tracking system.

A-Frame is an open source web framework for building 3D/VR/AR experiences entirely out of declarative, reusable custom HTML elements that are easy to read, understand, and copy-and-paste.

Here's a screencast of this demo on Meta Quest 2.

Meta Quest 2 has monochrome cameras, so the passthrough is in grayscale, while Meta Quest Pro has color cameras.

PWAs on Oculus Quest 2 are a lot of fun and very promising. The endless virtual canvas that lets users scale their screen to whatever fits the current task best has a lot of potential to change the way we work in the future. While typing in VR with hand tracking is still in its infancy and, at least for me, doesn't work very reliably yet, it works well enough for entering URLs or typing short texts.

What I like the most about PWAs on the Oculus Quest 2 is that they are just regular PWAs that can be used unchanged in a browser tab or through a thin APK wrapper without any platform-specific APIs. Targeting multiple platforms with the same code has never been easier. Here's to PWAs in VR and AR on the web. The future is bright!