The web is built on the same-origin policy: a security feature that restricts how documents and scripts can interact with resources from another origin. This principle restricts the ways websites can access cross-origin resources. For example, a document from https://a.example is prevented from accessing data hosted at https://b.example.

If the web could be designed from scratch, these exceptions wouldn't exist. Unfortunately, by the time the web community realized the key benefits of a strict same-origin policy, the web was already relying on these exceptions.

The security side-effects of such a lax same-origin policy were patched in two ways. One way was through the introduction of a new protocol called Cross Origin Resource Sharing (CORS) whose purpose is to make sure that the server allows sharing a resource with a given origin. The other way is by implicitly removing direct script access to cross-origin resources while preserving backward compatibility. Such cross-origin resources are called "opaque" resources. For example, this is why manipulating the pixels of a cross-origin image via CanvasRenderingContext2D fails unless CORS is applied to the image.

All these policy decisions are happening within a browsing context group. 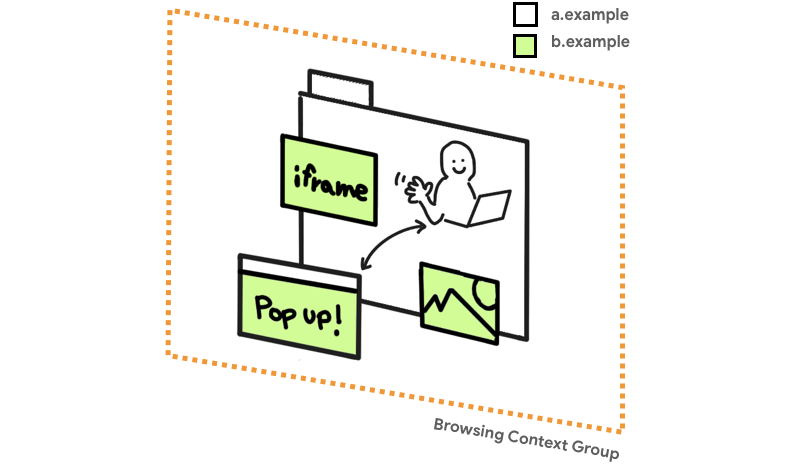 For a long time, the combination of CORS and opaque resources was enough to make browsers safe. Sometimes edge cases (such as JSON vulnerabilities) were discovered, and needed to be patched, but overall the principle of not allowing direct read access to the raw bytes of cross-origin resources was successful.

This all changed with Spectre, which makes any data that is loaded to the same browsing context group as your code potentially readable. By measuring the time certain operations take, attackers can guess the contents of the CPU caches, and through that, the contents of the process' memory. Such timing attacks are possible with low-granularity timers that exist in the platform, but can be sped up with high-granularity timers, both explicit (like performance.now()) and implicit (like SharedArrayBuffers). If evil.com embeds a cross-origin image, they can use a Spectre attack to read its pixel data, which makes protections relying on "opaqueness" ineffective. 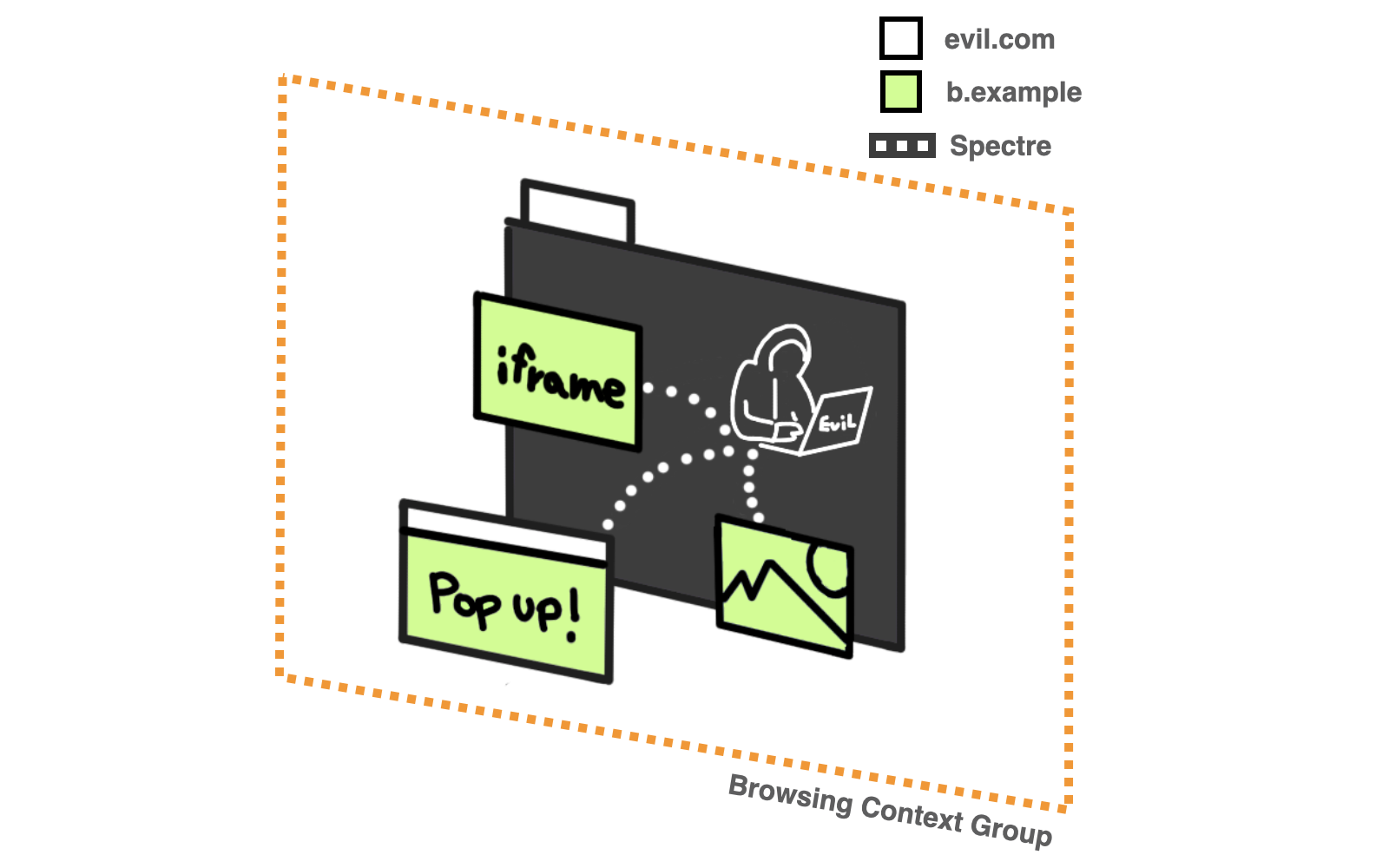 Ideally, all cross-origin requests should be explicitly vetted by the server that owns the resource. If vetting is not provided by the resource-owning server, then the data will never make it into the browsing context group of an evil actor, and therefore will stay out of reach of any Spectre attacks a web page could carry out. We call it a cross-origin isolated state. This is exactly what COOP+COEP is about.

Under a cross-origin isolated state, the requesting site is considered less dangerous and this unlocks powerful features such as SharedArrayBuffer, performance.measureUserAgentSpecificMemory() and high resolution timers with better precision which could otherwise be used for Spectre-like attacks. It also prevents modifying document.domain.

Cross Origin Embedder Policy (COEP) prevents a document from loading any cross-origin resources that don't explicitly grant the document permission (using CORP or CORS). With this feature, you can declare that a document cannot load such resources. 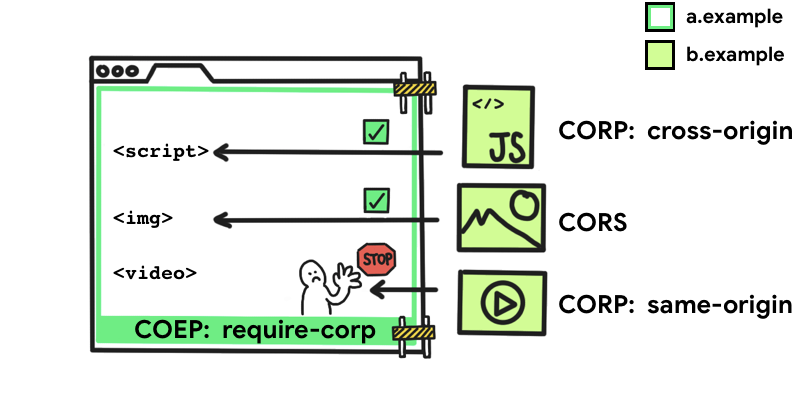 To activate this policy, append the following HTTP header to the document:

The require-corp keyword is the only accepted value for COEP. This enforces the policy that the document can only load resources from the same origin, or resources explicitly marked as loadable from another origin.

If a cross origin resource supports Cross Origin Resource Sharing (CORS), you may use the crossorigin attribute to load it to your web page without being blocked by COEP.

For example, if this image resource is served with CORS headers, use the crossorigin attribute so that the request to fetch the resource will use CORS mode. This also prevents the image from being loaded unless it sets CORS headers.

Similarly, you may fetch cross origin data through the fetch() method, which doesn't require special handling as long as the server responds with the right HTTP headers.

Cross Origin Resource Policy (CORP) was originally introduced as an opt-in to protect your resources from being loaded by another origin. In the context of COEP, CORP can specify the resource owner's policy for who can load a resource.

Resources that are marked same-site can only be loaded from the same site.

Resources that are marked same-origin can only be loaded from the same origin.

Resources that are marked cross-origin can be loaded by any website. (This value was added to the CORP spec along with COEP.)

Cross Origin Opener Policy (COOP) allows you to ensure that a top-level window is isolated from other documents by putting them in a different browsing context group, so that they cannot directly interact with the top-level window. For example, if a document with COOP opens a pop-up, its window.opener property will be null. Also, the .closed property of the opener's reference to it will return true. 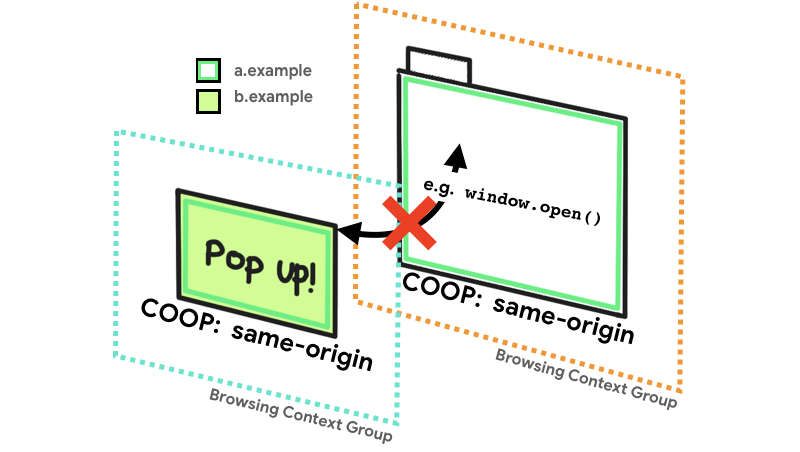 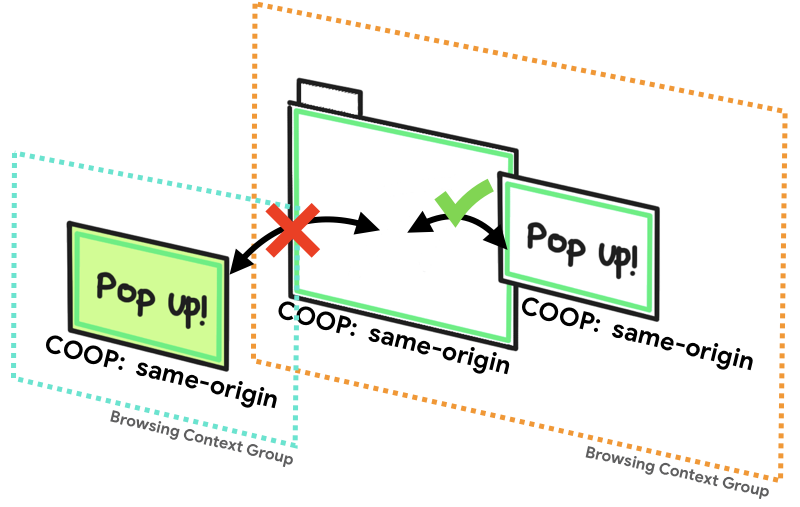 A top-level document with same-origin-allow-popups retains references to any of its popups which either don't set COOP or which opt out of isolation by setting a COOP of unsafe-none. 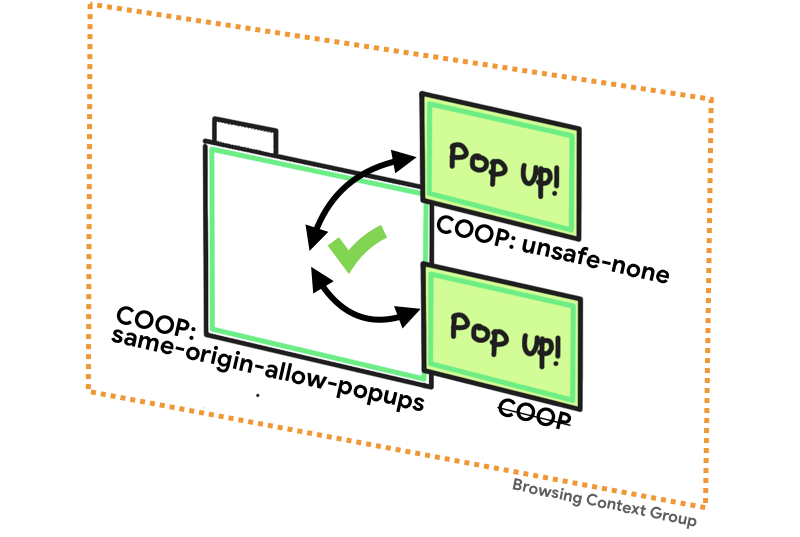 unsafe-none is the default and allows the document to be added to its opener's browsing context group unless the opener itself has a COOP of same-origin.

The noopener attribute has a similar effect to what you would expect from COOP except that it works only from the opener side. (You can't disassociate your window when it is opened by a third party.) When you attach noopener by doing something such as window.open(url, '_blank', 'noopener') or &LTa target="_blank" rel="noopener">, you can deliberately disassociate your window from the opened window. While noopener can be replaced by COOP, it's still useful for when you want to protect your website in browsers that don't support COOP.

If you want guaranteed access to powerful features like SharedArrayBuffer, performance.measureUserAgentSpecificMemory() or high resolution timers with better precision, just remember that your document needs to use both COEP with the value of require-corp and COOP with the value of same-origin. In the absence of either, the browser will not guarantee sufficient isolation to safely enable those powerful features. You can determine your page's situation by checking if self.crossOriginIsolated returns true.

Learn the steps to implement this at Making your website "cross-origin isolated" using COOP and COEP.