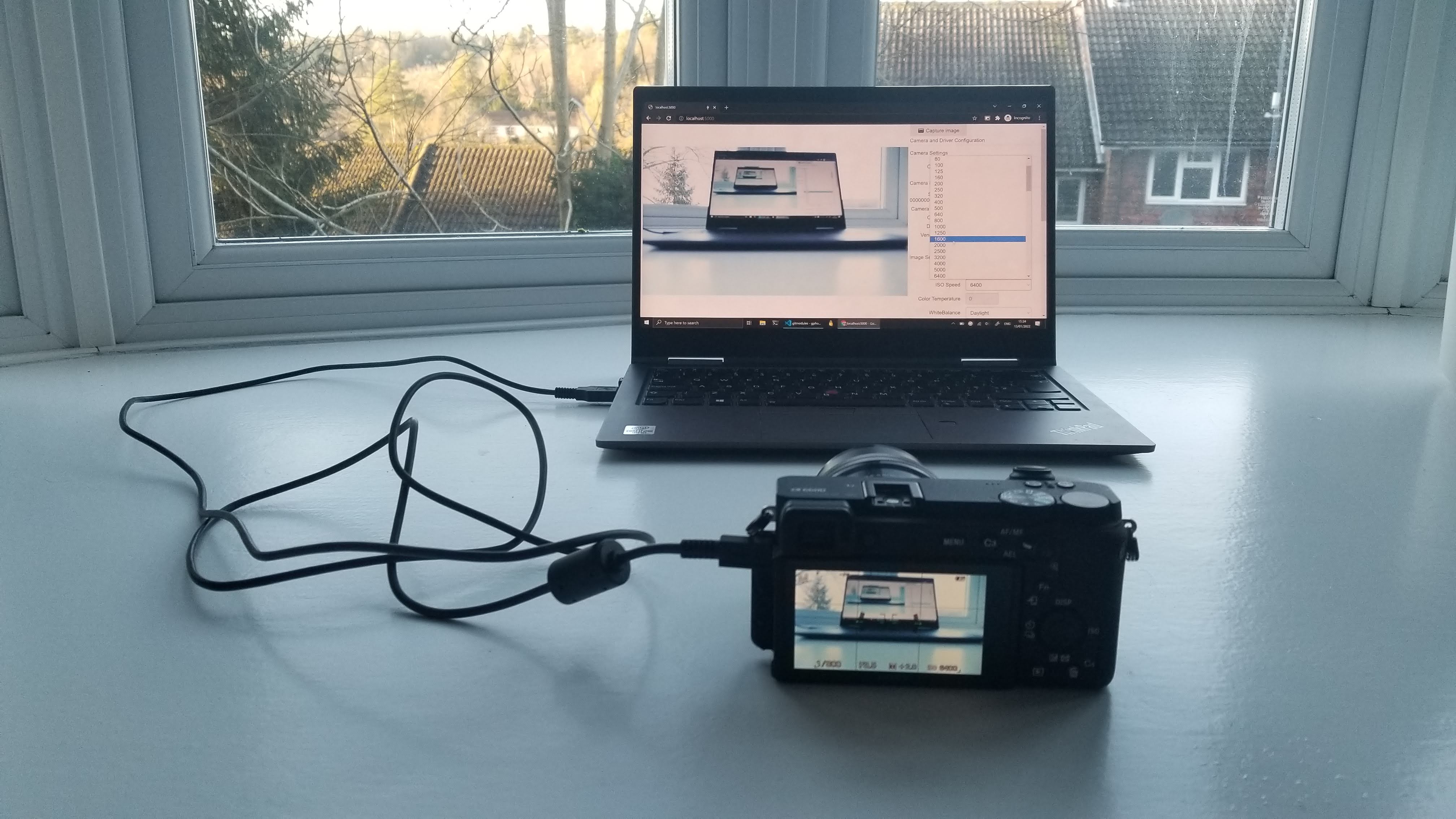 In the previous post I showed how the libusb library was ported to run on the web with WebAssembly / Emscripten, Asyncify, and WebUSB.

I also showed a demo built with gPhoto2 that can control DSLR and mirrorless cameras over USB from a web application. In this post I'll go deeper into the technical details behind the gPhoto2 port.

Additionally, libgphoto2 uses libtool for loading dynamic plugins, and even though I didn't have to fork libtool like the other two libraries, I still had to build it to WebAssembly, and point libgphoto2 to that custom build instead of the system package.

Most configure-based build systems, including the ones used in these libraries, allow overriding paths for dependencies via various flags, so that's what I tried to do first. However, when the dependency graph becomes complex, the list of path overrides for each library's dependencies becomes verbose and error-prone. I also found some bugs where build systems weren't actually prepared for their dependencies to live in non-standard paths.

Instead, an easier approach is to create a separate folder as a custom system root (often shortened to "sysroot") and point all the involved build systems to it. That way, each library will both search for its dependencies in the specified sysroot during build, and it will also install itself in the same sysroot so that others can find it more easily.

Emscripten already has its own sysroot under (path to emscripten cache)/sysroot, which it uses for its system libraries, Emscripten ports, and tools like CMake and pkg-config. I chose to reuse the same sysroot for my dependencies too.

With such configuration, I only needed to run make install in each dependency, which installed it under the sysroot, and then the libraries found each other automatically.

As mentioned above, libgphoto2 uses libtool to enumerate and dynamically load I/O port adapters and camera libraries. For example, the code for loading I/O libraries looks like this:

There are a few problems with this approach on the web:

It's possible to adapt the build system to those differences and hardcode the list of dynamic plugins somewhere during the build, but an even easier way to solve all those issues is to avoid dynamic linking to begin with.

Turns out, libtool abstracts away various dynamic linking methods on different platforms, and even supports writing custom loaders for others. One of the built-in loaders it supports is called "Dlpreopening":

“Libtool provides special support for dlopening libtool object and libtool library files, so that their symbols can be resolved even on platforms without any dlopen and dlsym functions.
…
Libtool emulates -dlopen on static platforms by linking objects into the program at compile time, and creating data structures that represent the program’s symbol table. In order to use this feature, you must declare the objects you want your application to dlopen by using the -dlopen or -dlpreopen flags when you link your program (see Link mode).”

This mechanism allows emulating dynamic loading at libtool level instead of Emscripten, while linking everything statically into a single library.

The only problem this doesn't solve is enumeration of dynamic libraries. The list of those still needs to be hardcoded somewhere. Luckily, the set of plugins I needed for the app is minimal:

Here's what the updated dependency diagram looks like with everything linked statically together:

So that's what I hardcoded for Emscripten builds:

In the autoconf build system, I now had to add -dlpreopen with both of those files as link flags for all executables (examples, tests and my own demo app), like this:

Finally, now that all the symbols are linked statically in a single library, libtool needs a way to determine which symbol belongs to which library. To achieve this, it requires developers to rename all exposed symbols like {function name} to {library name}_LTX_{function name}. The easiest way to do this is by using #define to redefine symbol names at the top of the implementation file:

This naming scheme also prevents name clashes in case I decide to link camera-specific plugins in the same app in the future.

After all these changes were implemented, I could build the test application and load the plugins successfully.

gPhoto2 allows camera libraries to define their own settings in a form of widget tree. The hierarchy of widget types consists of:

The name, type, children, and all the other relevant properties of each widget can be queried (and, in case of values, also modified) via the exposed C API. Together, they provide a foundation for automatically generating settings UI in any language that can interact with C.

Settings can be changed either via gPhoto2, or on the camera itself at any point in time. Additionally, some widgets can be readonly, and even the readonly state itself depends on the camera mode and other settings. For example, shutter speed is a writable numeric field in M (manual mode), but becomes an informational readonly field in P (program mode). In P mode, the value of shutter speed will also be dynamic and continuously changing depending on the brightness of the scene the camera is looking at.

All in all, it's important to always show up-to-date information from the connected camera in the UI, while at the same time allowing the user to edit those settings from the same UI. Such bidirectional data flow is more complex to handle.

gPhoto2 does not have a mechanism to retrieve only changed settings, only the entire tree or individual widgets. In order to keep the UI up-to-date without flickering and losing input focus or scroll position, I needed a way to diff the widget trees between the invocations and update only the changed UI properties. Luckily, this is a solved problem on the web, and is the core functionality of frameworks like React or Preact. I went with Preact for this project, as it's much more lightweight and does everything I need.

On the C++ side I now needed to retrieve and recursively walk the settings tree via the earlier linked C API, and convert each widget to a JavaScript object:

On the JavaScript side, I could now call configToJS, walk over the returned JavaScript representation of the settings tree, and build the UI via Preact function h:

By running this function repeatedly in an infinite event loop, I could get the settings UI to always show the latest information, while also sending commands to the camera whenever one of the fields is edited by the user.

Preact can take care of diffing the results and updating the DOM only for the changed bits of the UI, without disrupting the page focus or edit states. One problem that remains is the bidirectional data flow. Frameworks like React and Preact were designed around unidirectional data flow, because it makes it a lot easier to reason about the data and compare it between reruns, but I'm breaking that expectation by allowing an external source - the camera - to update the settings UI at any time.

I worked around this problem by opting out from UI updates for any input fields that are currently being edited by the user:

This way, there is always only one owner of any given field. Either the user is currently editing it, and won't be disrupted by the updated values from the camera, or the camera is updating the field value while it's out of focus.

During the pandemic, a lot of people moved to online meetings. Among other things, this led to shortages on the webcam market. To get a better video quality compared to built-in cameras in laptops, and in response to said shortages, many DSLR and mirrorless camera owners started looking for ways to use their photography cameras as webcams. Several camera vendors even shipped official utilities for this very purpose.

Like the official tools, gPhoto2 supports streaming video from the camera to a locally stored file or directly to a virtual webcam too. I wanted to use that feature to provide a live view in my demo. However, while it's available in the console utility, I couldn't find it anywhere in the libgphoto2 library APIs.

Looking at the source code of the corresponding function in the console utility, I found that it's not actually getting a video at all, but instead keeps retrieving the camera's preview as individual JPEG images in an endless loop, and writing them out one by one to form an M-JPEG stream:

I was astonished that this approach works efficiently enough to get an impression of smooth realtime video. I was even more skeptical about being able to match the same performance in the web application too, with all the extra abstractions and Asyncify in the way. However, I decided to try anyway.

On the C++ side I exposed a method called capturePreviewAsBlob() that invokes the same gp_camera_capture_preview() function, and converts the resulting in-memory file to a Blob that can be passed to other web APIs more easily:

On the JavaScript side, I have a loop, similar to the one in gPhoto2, that keeps retrieving preview images as Blobs, decodes them in the background with createImageBitmap, and transfers them to the canvas on the next animation frame:

Using those modern APIs ensures that all of the decoding work is done in the background, and the canvas gets updated only when both the image and the browser are fully prepared for drawing. This achieved a consistent 30+ FPS on my laptop, which matched the native performance of both gPhoto2 and the official Sony software.

When a USB data transfer is requested while another operation is already in progress, it will commonly result in a "device is busy" error. Since the preview and the settings UI update regularly, and the user might be trying to capture an image or modify settings at the same time, such conflicts between different operations turned out to be very frequent.

To avoid them, I needed to synchronize all the accesses within the application. For that, I've built a promise-based async queue:

By chaining each operation in a then() callback of the existing queue promise, and storing the chained result as the new value of queue, I can make sure that all operations are executed one by one, in order and without overlaps.

Any operation errors are returned to the caller, while critical (unexpected) errors mark the entire chain as a rejected promise, and ensure that no new operation will be scheduled afterwards.

By keeping the module context in a private (non-exported) variable, I'm minimizing the risks of accessing the context by accident somewhere else in the app without going through the schedule() call.

To tie things together, now each access to the device context has to be wrapped in a schedule() call like this:

After that, all the operations were executing successfully without conflicts.

Feel free to browse the codebase on Github for more implementation insights. I also want to thank Marcus Meissner for maintenance of gPhoto2 and for his reviews of my upstream PRs.

As shows in these posts, WebAssembly, Asyncify and Fugu APIs provide a capable compilation target for even the most complex applications. They allow you to take a library or an application previously built for a single platform, and port it to the web, making it available to a vastly larger number of users across desktop and mobile devices alike.