Fetching resources over the network is both slow and expensive:

How can you avoid unnecessary network requests? The browser's HTTP Cache is your first line of defense. It's not necessarily the most powerful or flexible approach, and you have limited control over the lifetime of cached responses, but it's effective, it's supported in all browsers, and it doesn't require much work.

This guide shows you the basics of an effective HTTP caching implementation.

There isn't actually a single API called the HTTP Cache. It's the general name for a collection of web platform APIs. Those APIs are supported in all browsers:

How the HTTP Cache works #

All HTTP requests that the browser makes are first routed to the browser cache to check whether there is a valid cached response that can be used to fulfill the request. If there's a match, the response is read from the cache, which eliminates both the network latency and the data costs that the transfer incurs.

While there are a number of important headers that should be included in your web app's outgoing requests, the browser almost always takes care of setting them on your behalf when it makes requests. Request headers that affect checking for freshness, like If-None-Match and If-Modified-Since just appear based on the browser's understanding of the current values in the HTTP Cache.

This is good news—it means that you can continue including tags like &LTimg src="my-image.png"> in your HTML, and the browser automatically takes care of HTTP caching for you, without extra effort.

Developers who do need more control over the HTTP Cache in their web application have an alternative—you can "drop down" a level, and manually use the Fetch API, passing it Request objects with specific cache overrides set. That's beyond the scope of this guide, though!

The part of the HTTP caching setup that matters the most is the headers that your web server adds to each outgoing response. The following headers all factor into effective caching behavior:

Some web servers have built-in support for setting those headers by default, while others leave the headers out entirely unless you explicitly configure them. The specific details of how to configure headers varies greatly depending on which web server you use, and you should consult your server's documentation to get the most accurate details.

To save you some searching, here are instructions on configuring a few popular web servers:

Leaving out the Cache-Control response header does not disable HTTP caching! Instead, browsers effectively guess what type of caching behavior makes the most sense for a given type of content. Chances are you want more control than that offers, so take the time to configure your response headers.

Which response header values should you use? #

There are two important scenarios that you should cover when configuring your web server's response headers.

When responding to requests for URLs that contain "fingerprint" or versioning information, and whose contents are never meant to change, add Cache-Control: max-age=31536000 to your responses.

Setting this value tells the browser that when it needs to load the same URL anytime over the next one year (31,536,000 seconds; the maximum supported value), it can immediately use the value in the HTTP Cache, without having to make a network request to your web server at all. That's great—you've immediately gained the reliability and speed that comes from avoiding the network!

Build tools like webpack can automate the process of assigning hash fingerprints to your asset URLs.

You can also add the immutable property to your Cache-Control header as a further optimization, though it will be ignored in some browsers.

Unfortunately, not all of the URLs you load are versioned. Maybe you're not able to include a build step prior to deploying your web app, so you can't add hashes to your asset URLs. And every web application needs HTML files—those files are (almost!) never going to include versioning information, since no one will bother to use your web app if they need to remember that the URL to visit is https://example.com/index.34def12.html. So what can you do for those URLs?

This is one scenario in which you need to admit defeat. HTTP caching alone isn't powerful enough to avoid the network completely. (Don't worry—you'll soon learn about service workers, which will provide the support we need to swing the battle back in your favor.) But there are a few steps you can take to make sure that network requests are as quick and efficient as possible.

The following Cache-Control values can help you fine-tune where and how unversioned URLs are cached:

Along with that, setting one of two additional response headers can also help: either ETag or Last-Modified. As mentioned in Response headers, ETag and Last-Modified both serve the same purpose: determining if the browser needs to re-download a cached file that has expired. ETag is the recommended approach because it's more accurate.

By setting ETag or Last-Modified, you'll end up making the revalidation request much more efficient. They end up triggering the If-Modified-Since or If-None-Match request headers that were mentioned in Request headers.

When a properly configured web server sees those incoming request headers, it can confirm whether the version of the resource that the browser already has in its HTTP Cache matches the latest version on the web server. If there's a match, then the server can respond with a 304 Not Modified HTTP response, which is the equivalent of "Hey, keep using what you've already got!" There's very little data to transfer when sending this type of response, so it's usually much faster than having to actually send back a copy of the actual resource being requested.

The HTTP Cache is an effective way to improve load performance because it reduces unnecessary network requests. It's supported in all browsers and doesn't take too much work to set up.

The following Cache-Control configurations are a good start:

And the ETag or Last-Modified header can help you revalidate expired cache resources more efficiently.

Try the HTTP Cache codelab to get hands-on experience with Cache-Control and ETag in Express.

If you're looking to go beyond the basics of using the Cache-Control header, check out Jake Archibald's Caching best practices & max-age gotchas guide.

See Love your cache for guidance on how to optimize your cache usage for return visitors.

If you have more time, here are further ways that you can optimize your usage of the HTTP Cache: 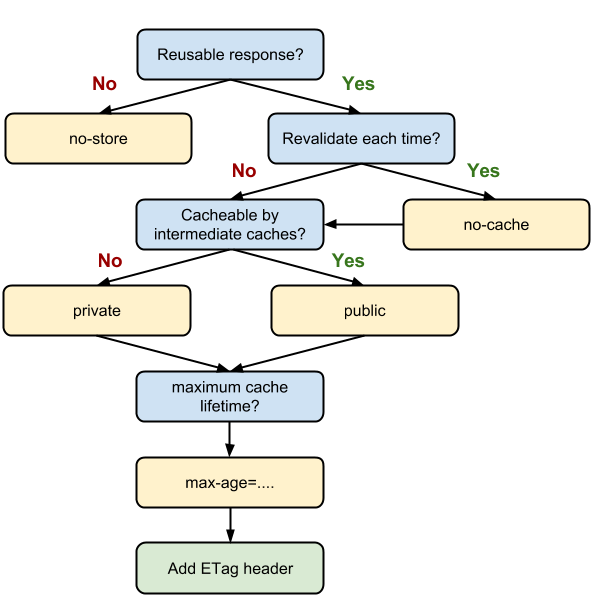