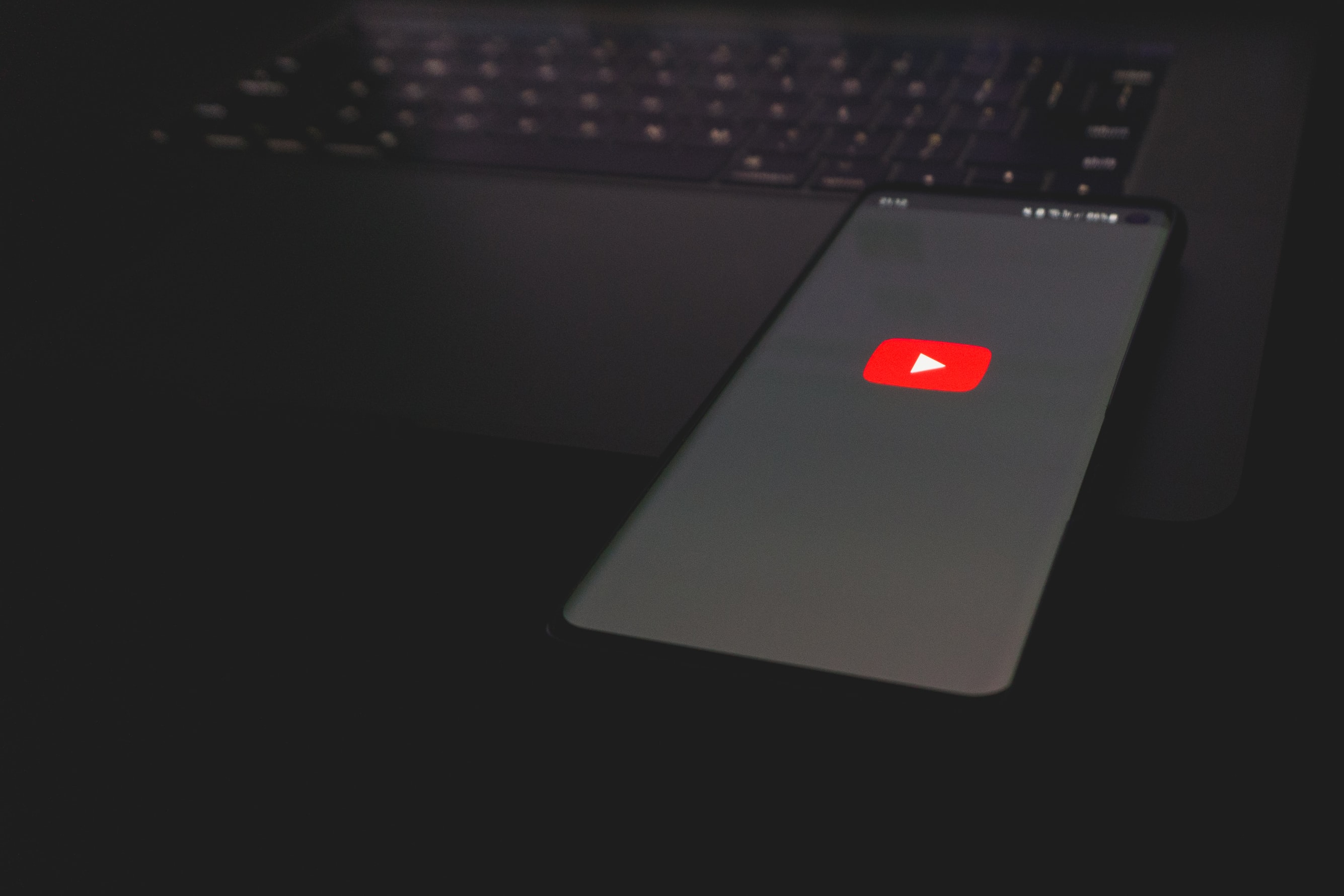 Many sites use third-party embeds to create an engaging user experience by delegating some sections of a web page to another content provider. The most common examples of third-party content embeds are video players, social-media feeds, maps, and advertisements.

Third-party content can impact the performance of a page in many ways. It can be render-blocking, contend with other critical resources for network and bandwidth, or affect the Core Web Vitals metrics. Third-party embeds may also cause layout shifts as they load. This article discusses performance best practices that you can use when loading third-party embeds, efficient loading techniques, and the Layout Shift Terminator tool that helps reduce layout shifts for popular embeds.

It's best to use the techniques described in this post to load only offscreen or non-primary page content. This ensures that all the critical content gets indexed by search engines.

What is an embed #

A third-party embed is any content displayed on your site that is: 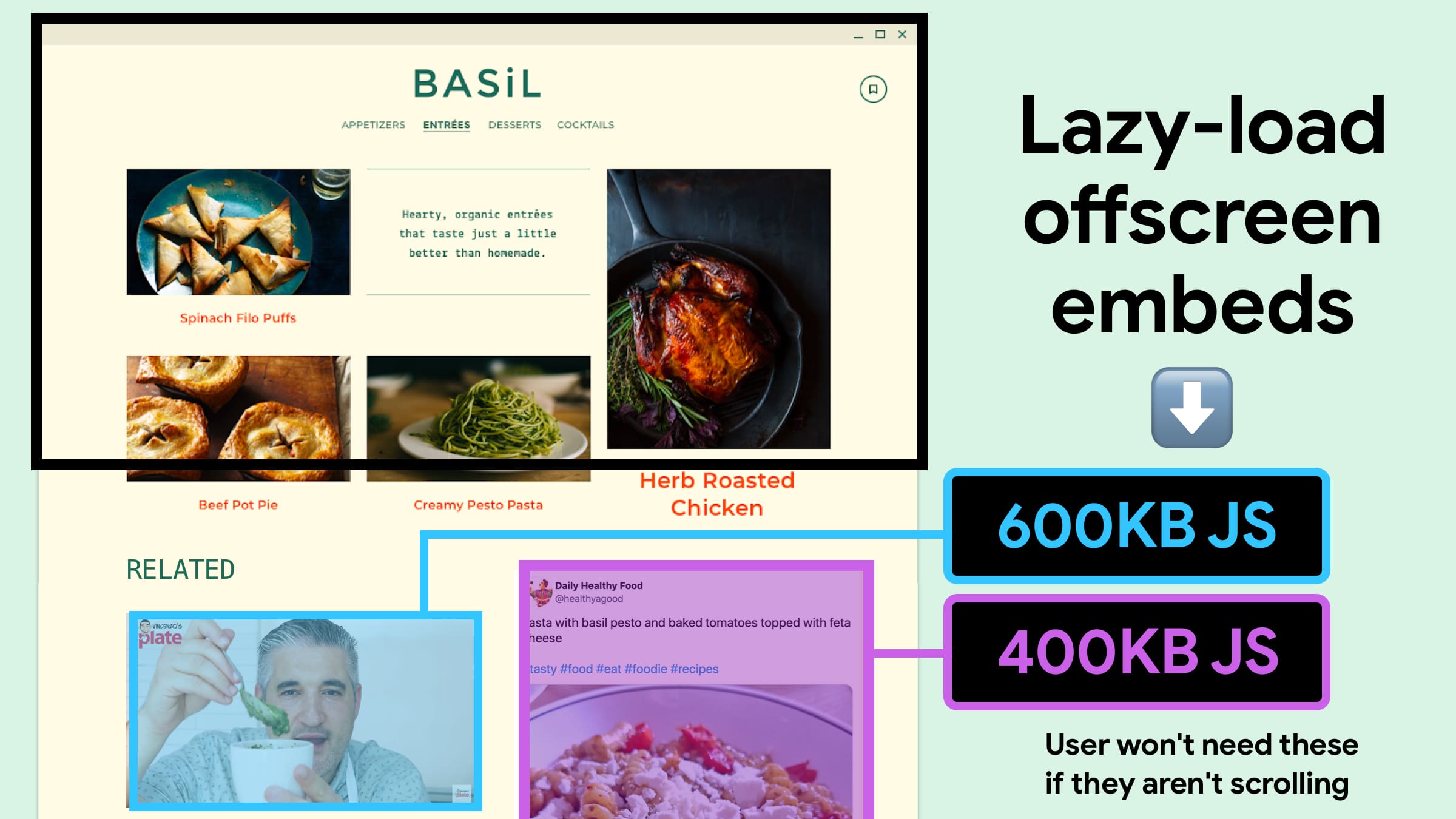 Embeds are frequently used in the following:

Many popular embeds include over 100 KB of JavaScript, sometimes even going up to 2 MB. They take more time to load and keep the main thread busy when executing. Performance monitoring tools such as Lighthouse and Chrome DevTools help to measure the impact of third-party embeds on performance.

It is a good practice to periodically audit the performance impact of your embeds and third-party code because embed source code may change. You can use this opportunity to remove any redundant code. 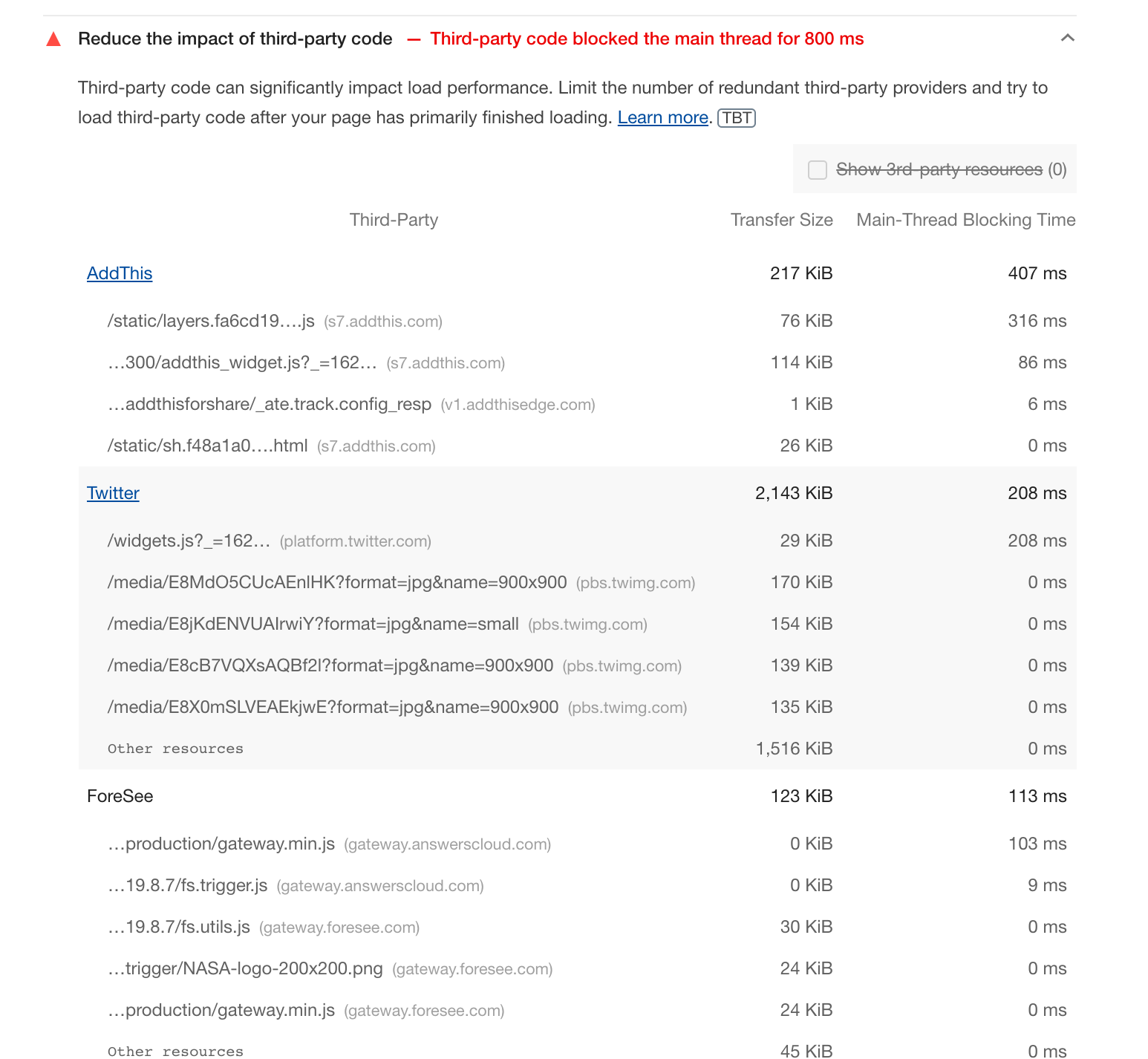 For the best user experience, the main content should load quickly and before any other supporting content. For example, the news text on a news page should load before embeds for a Twitter feed or advertisements.

Since third-party content usually comes after the primary content, it may not be visible in the viewport when the page loads. In that case, downloading third-party resources may be deferred until the user scrolls down to that part of the page. This not only helps optimize the initial page load but also reduces the download costs for users on fixed data plans and slow network connections.

Delaying the download of content until it is actually needed is called lazy-loading. Depending on the requirements and the type of embed, you can use different lazy-loading techniques explained below.

For third-party embeds loaded through &LTiframe> elements, you can use browser-level lazy-loading to defer loading offscreen iframes until users scroll near them. The loading attribute for &LTiframe> is available in Chrome 77 and above and has also been introduced to other Chromium-based browsers.

Following are some ways in which you can lazy load iframes for different types of embeds.

Because browsers use an embed’s distance-from-viewport, in addition to signals like effective connection type and Lite-mode, to decide when an iframe should be loaded, native lazy-loading can be inconsistent. If you need better control on the distance thresholds or you want to provide a consistent lazy-loading experience across browsers, you can use the lazysizes library.

lazysizes is a fast, SEO-friendly lazy loader for both images and iframes. Once you have downloaded the component, it can be used with an iframe for a YouTube embed as follows.

Similarly, lazysizes may be used with iframes for other third-party embeds.

Note that lazysizes uses the Intersection Observer API to detect when an element becomes visible.

Facebook provides different types of social plugins that can be embedded. This includes posts, comments, videos, and the most popular Like button. All plugins include a setting for data-lazy. Setting it to true ensures that the plugin will use the browser's lazy-loading mechanism by setting the loading="lazy" iframe attribute.

Instagram provides a block of markup and a script as part of the embed. The script injects an &LTiframe> into the page. Lazy-loading this &LTiframe> can improve performance as the embed can be over 100 KB gzipped in size. Many Instagram plugins for WordPress sites like WPZoom and Elfsight provide the lazy-loading option.

While interactive embeds add value to the page, many users may not interact with them. For example, not every user browsing a restaurant page will click, expand, scroll, and navigate the map embed. Similarly, not every user to a telecom service providers page will interact with the chatbot. In these cases, you can avoid loading or lazy-loading the embed altogether by displaying a facade in its place.

A facade is a static element that looks similar to the actual embedded third-party but is not functional and, therefore, much less taxing on the page load. Following are a few strategies to load such embeds optimally while still providing some value to the user.

Use static images as facades #

Static images can be used instead of map embeds where you might not need to make the map interactive. You can zoom in on the area of interest on the map, capture an image, and use this instead of the interactive map embed. You can also use DevTools Capture node screenshot functionality to capture a screenshot of the embedded iframe element, as shown below. 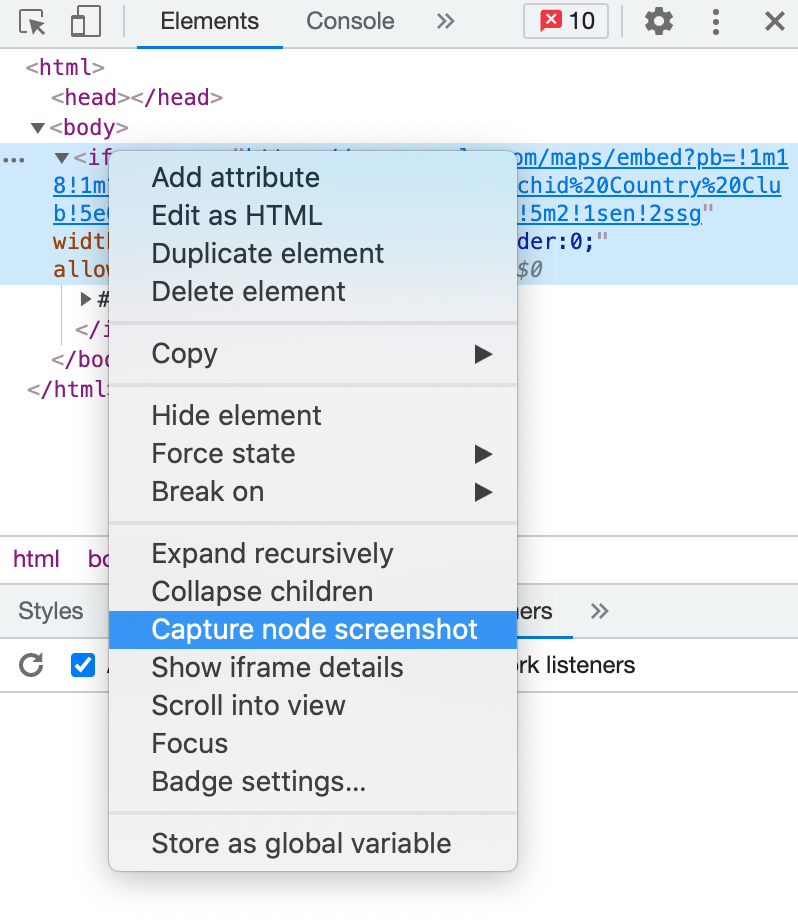 DevTools captures the image as a png, but you can also consider converting it to WebP format for better performance.

Use dynamic images as facades #

This technique allows you to generate images corresponding to an interactive embed at run time. Following are some of the tools that allow you to generate static versions of embeds on your pages.

Use click-to-load to enhance facades #

The click-to-load concept combines lazy-loading and facades. The page initially loads with the facade. When the user interacts with the static placeholder by clicking on it, the third-party embed is loaded. This is also known as the import on interaction pattern and can be implemented using the following steps.

Facades may be used with third-party embeds for video players, chat widgets, authentication services, and social media widgets. YouTube video embeds that are just images with a play button are facades that we come across frequently. The actual video loads only when you click on the image.

You can build a custom click-to-load facade using the import on interaction pattern or use one of the following open source facades available for different types of embeds.

Remove or replace embeds with links #

If you find that some third-party embeds result in poor loading performance and using any of the techniques above is not an option, the simplest thing that you can do is remove the embed entirely. If you still want your users to be able to access the content in the embed, you can provide a link to it with target="_blank" so that the user can click and view it in another tab.

Since visual stability is important to guarantee a smooth user experience, Cumulative Layout Shift (CLS) measures how often those shifts happen and how disruptive they are.

Layout shifts can be avoided by reserving space during page load for elements that are going to be dynamically loaded later. The browser can determine the space to be reserved if it knows the width and height of the elements. You can ensure this by specifying the width and height attributes of iframes or by setting a fixed size for static elements where the third-party embed will be loaded. For example, an iframe for a YouTube embed should have width and height specified as follows.

Popular embeds like YouTube, Google Maps, and Facebook provide the embed code with size attributes specified. However, there may be providers who do not include this. For example, this code snippet does not indicate the dimensions of the resulting embed.

Since third-party embeds often omit the dimensions (width, height) for the final content they render, they can cause significant layout shifts on a page. This problem can be tricky to address without manually inspecting the final sizes using DevTools at a variety of different viewport sizes.

Now there’s an automated tool, Layout Shift Terminator, that can help you reduce layout shifts from popular embeds, such as from Twitter, Facebook, and other providers. 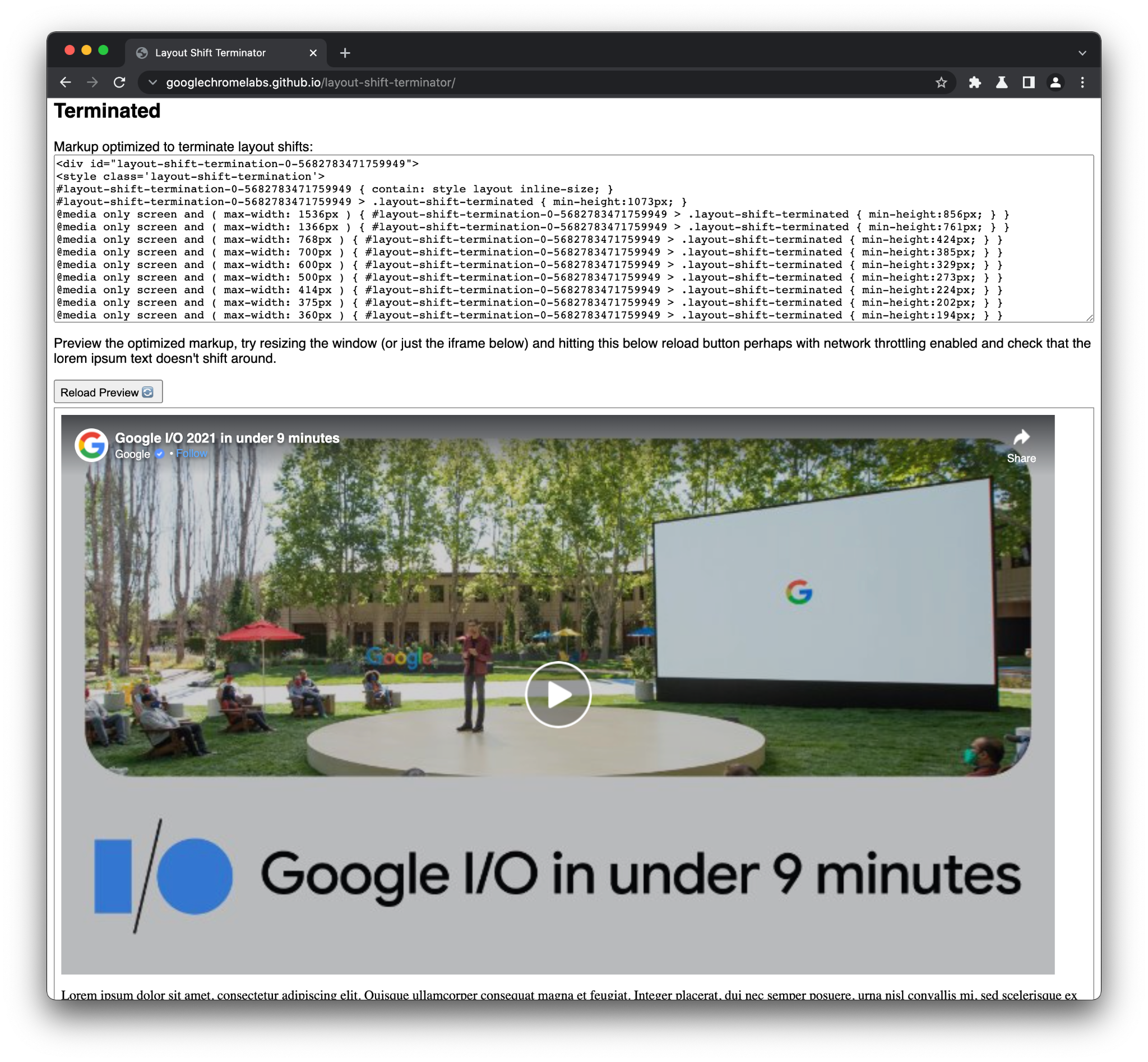 Try out the Layout Shift Terminator, and feel free to leave any feedback on GitHub. The tool is in a beta state and aims to improve over time with further refinements.

Third-party embeds can provide a lot of value to users, but as the number and size of embeds on a page increases, performance can suffer. That’s why it is necessary to measure, judge, and use appropriate loading strategies for embeds based on their position, relevance, and potential users' needs.